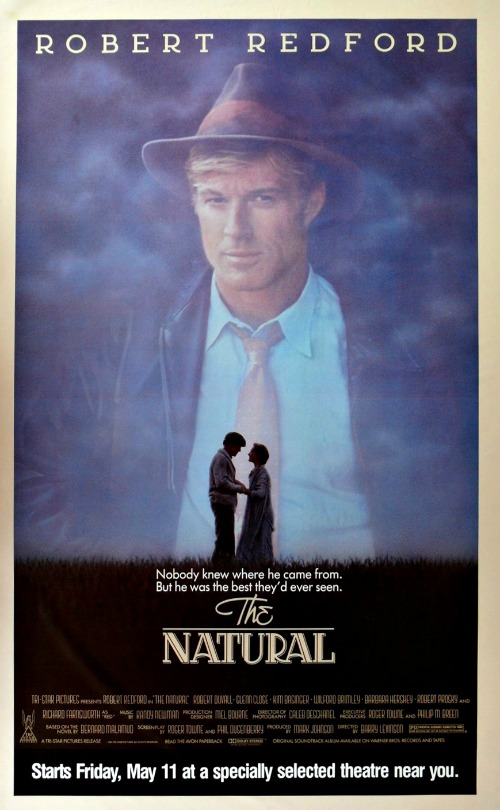 When asked by a befuddled and confused Elmer Fudd “What season is it?” in one of the numerous cartoons in which they co-starred, Bugs Bunny, who’s posing as a game warden replied, “It’s baseball season, sonny!”  He tossed the ball across the snow covered terrain, and Elmer went off, blasting the ball up and down the hills to conclude the episode.  Well, turns out baseball season really IS upon us.  And while The Natural doesn’t have such slapstick comedy included, with the exception of perhaps one montage establishing the “ne’er do well” behavior of the fictional Knights ball club, it is an ideal, excitement inducing film to watch as another glorious baseball year begins.  So, in honor of Opening Day 2018, let’s look at an American version of King Arthur in the form of Roy Hobbs, who wouldn’t be complete without Wonderboy – his Excalibur.

I love, love, love this movie.  Anyone who loves baseball can watch it – and anyone who detests the game, yet loves the David & Goliath story set up can watch it as well.  Or, if  baseball isn’t necessarily your favorite sport or movie backdrop, but you know the multiple stars in this cast, you’ll dig The Natural.  Regardless, what I’m trying to say is, this is a crowd pleaser – much like the game that dominates its story.  Even if you don’t care for the minutiae that makes up baseball history and stats, or you don’t care for the ball park itself except for its tasty treats, The Natural has something for everyone. 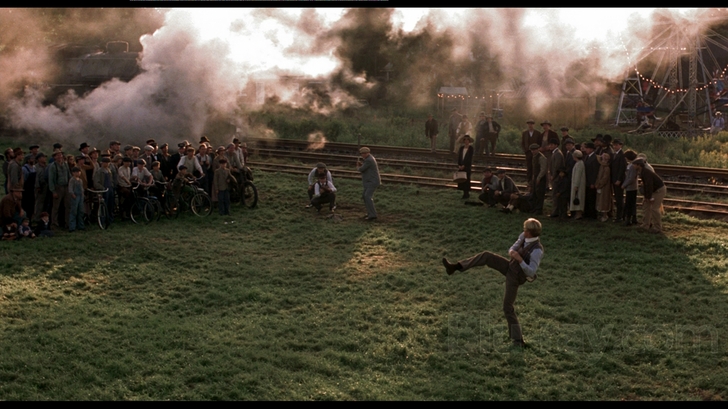 The film begins with a boy on a farm, tossing the ball with his dad.  What could be more iconically American than that, right?  Well, the seed is planted right from the first page of the script as the father encourages the boy to be the best he can be.  That night, there’s a terrific lightning storm on the farm – one which cuts a huge tree in half right outside the farmhouse.  Well, the boy takes it upon himself to take a part of that tree, which is most certainly a physical piece of the very location where he grew up, and sculpts it into a sword – or, if you prefer, a baseball bat with the name, “Wonderboy” and an image of the lightning bolt.  This action suggests that Roy Hobbs, this boy who is about to follow his destiny as we watch, is one to remember such nights as true bookmarks in an extraordinary life. 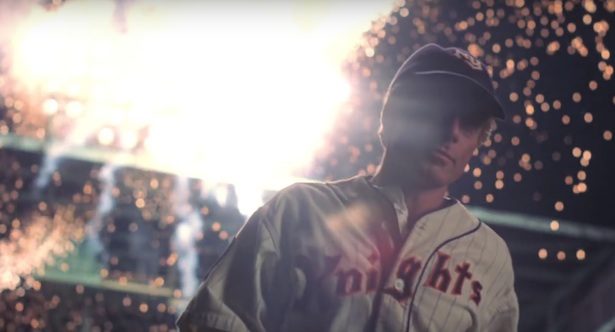 Hobbs is in love with two things – baseball, and Iris (Glenn Close).  On the night before he’s to take the train to go see about playing for one of the big teams, he loses his virginity with Iris in the barn.  Next day, he’s on the train all right, and his manager notices a reporter, Max Mercy (Robert Duvall), traveling with none other than the Man himself, Babe Ruth (Joe Don Baker, another character actor that fills in an enormously recognizable cast).  When the manager tries to introduce Hobbs, Mercy is positively rude.  He has no time for hicks and hayseeds who want to play in The Show, to use a Bull Durham term.  Well, when the train stops and the manager challenges The Babe to take some pitches from Hobbs, claiming he’s sure the young man can strike the legend out… we have our first “lean in” moment of the film.

Within this same episode, we’re also introduced to a single Siren in the form of Barbara Hersey.  On the train, there are references to pro athletes being murdered – and Harriet Bird, for untold and mysterious reasons, is out to get The Babe.  That is, until she sees Hobbs pitch to him.  Seduction unfolds, and before Hobbs knows it, he’s been shot in his own hotel room by Bird, who then… flies away?  We never know.  She’s a Siren – who knows how they operate.

I’m not ruining anything for you as these early scenes unfold quickly before the film cuts to 16 years later.  What we end up watching is not the dominant career of a ball player based on a Babe Ruth kind of star.  Instead, we see an underdog, a guy who’s nearly out of time trying to make that mark he never got to make – and still has hopes of leaving a legend behind.  The mythical elements continue throughout the film.  There’s another hero in Hobbs’ outfield position, the current star of the Knights in the form of Bump Bailey (Michael Madsen).  You might say the minotaur reveals himself in the form of the evil judge who owns the team (Robert Prosky).  The judge sits in a cave or office completely in the dark, although he can see Hobbs…  And his lackey is literally a Cyclops, a gambler/string-puller named Gus Sands played by none other than the father from A Christmas Story, Darren McGavin.  You could even make the argument that another Siren swoops into Hobbs’ life in the form of Memo Paris (Kim Basinger).

These are very American gothic sort of settings, characters and actions, and they all fit the traditional mythical set-up of heroes and quests.  The Natural is no different.  And, it works.  Whether you equate the American Hobbs to Hercules or King Arthur doesn’t really matter.  What does count is that this guy, despite his bad luck and years of rolling around, finally gets his shot.  And, isn’t that why we watch the great game itself?  How many things have to go right and break their way for that batter to be up in the bottom of the 9th of the World Series with two on, two strikes and two outs…?  Enjoy this new baseball season – and, The Natural.

The Natural on IMDB