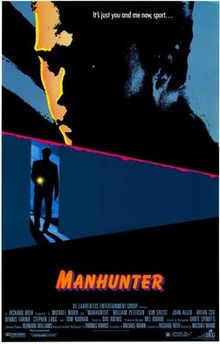 I’ll probably never forget the first time I saw Manhunter.  I was in high school, and it was a really weird night where I was already on edge, having had a really bizarre evening at the restaurant I worked at.  Long story short, this guy who used to work on the cooking line with me came in to get his last check – and essentially went berserk.  I mean tossing dishes, throwing anything he could get his hands on at staff and customers alike before running out the front door.  I don’t know – I heard rumors of girlfriend problems and some steroid use The man was jacked, no doubt about that.  I guess the point is that I drove home thinking about how it’s really difficult to say you know anyone fully.  I mean, aren’t there folks at your work place you’ve had doubts about?  What do they do when they’re not with you at work, particularly that really quiet guy?  Well, that night when I finished Manhunter, I figured that the fictional employees where Francis Dollarhyde worked surely had similar thoughts.

Whatever the case, watching this Michael Mann thriller after such an event was probably not a great idea.  This movie is, for me personally, one of the most intense and essentially scary thriller/suspense films I can think of.  And, having recently rewatched on Amazon Prime, I found myself supremely impressed with numerous aspects of the movie.  We’ve got a real color palate in play, which has become a hallmark of Mann’s filmography.  We have a duo of villains that scare the hell out of you every time they’re on screen, even if the scene is somewhat standard in nature.  And, we have an intense, behind-the-scenes investigation, which shows us things along the way and keeps us engaged with the story from the initial, creepy images through to the last shot.

So, let’s start with a more academic discussion about the visual feel of Manhunter.  Remember, Mann was an executive producer on the 1980s hit Miami Vice, which aired on NBC for seven years.  Sure, you can argue that Vice was a classic example of a niche TV show that “jumped the shark,” but you can’t argue the cultural phenomenon that show sparked.  Much of it was related to the neon, the pastel colors and outlandish shots of the ocean that became synonymous with the show – and influenced everything from pop music to fashion.  Similarly, this 1986 film has a real palate that helps visually tell the story.

Consider the bookend scenes of the film, which take place in Captiva, FL.  The blues that appear on screen, whether they’re of the Gulf of Mexico or the interior of Will Graham’s bedroom, give a sense of comfort and home.  The blue hues of this temperature are not seen in the seriousness of Act Two or any scenes related to Lecktor or the killer on the loose, referred to as The Tooth Fairy, played with the utmost tone of villainy by character actor Tom Noonan.  But, they sure are dominating the film’s poster, aren’t they?  As discussed in previous posts about the importance of a movie’s poster, many other films could take a page out of Manhunter‘s playbook.

Instead, when Graham interviews Dr. Hannibal Lecktor – yes, that same Lecktor made infamous by Best Picture Silence of the Lambs – the cell is stark white and full of florescent overhead lighting, which fits the direct nature of Lecktor’s dialogue and the seriousness of the institutional set.  One of my favorite shots is of Graham, leaving the interview in a cold sweat, running down this crazy ramp that goes up four stories into the correctional building.  Look at how industrial and stark this image is compared to the rounded, comfy edges of home in Captiva.  Long story short (too late) – Manhunter is a must watch for cinema students who want to apply a well thought color palate to accentuate their story.  And for the casual moviegoer who finishes a film and can’t quite describe why they enjoyed it so much, Mann’s specific choices related to color are one of those subtle things that makes that kind of difference in your viewing experience.

But, as referenced in the previous paragraph, Dr. Hannibal Lecktor is indeed a character in Manhunter – and, fun fact, this was the villain’s debut on screen.  Played with the same direct swagger that Anthony Hopkins so famously captured in 1991’s Silence of the Lambs, Brian Cox does a thorough job of creating unease whenever his character is onscreen.  I probably saw the actor for the first time in Braveheart as the hero’s Uncle Argyle.  In Manhunter, everything from his dialogue to his attitude to the way Mann shoots him through the cold bars of the cell lends itself to that feeling of discomfort and terror.  As in Silence, Lecktor is being used.  Hero Will Graham, portrayed with genuine intensity by William Petersen, wants Lecktorto help him get inside of the at-large killer, the Tooth Fairy.  Lecktor is naturally reticent, particularly considering it was Graham who put the Doc in prison for murdering college students.

So, Manhunter shares some of that plot through line of a killer helping the investigator capture another killer.  And the Tooth Fairy is some kind of movie villain.  Tom Noonan deserves a lot of credit for how intimidating he is in some of his scenes, and how delicate his character appears when romancing his colleague Reba McClane, played with her usual emotional truthfulness by Joan Allen.  The unexpected scenes of these unlikely characters’ romance really throws us viewers for a loop, and makes the urgency of Graham’s investigation all the more hyper.  In fact, Mann takes the time to pause the action, and focus on the relationships between the villain and the hero – a rare choice in a thriller/suspense film.

As I’ve mentioned in other posts, I find the investigation a perfect plot for a two hour film experience.  We willingly buckle up for the ride, with that safe feeling in the back of our minds that says, “no matter how bad this gets, we know it’ll all be over soon…”  Well, maybe that’s why Manhunter effected me so much – this film never feels safe.  Perhaps it’s the introduction of Graham’s family, or the fact that his wife is thoroughly concerned with Graham’s health after the Lecktor experience.  Or, maybe it’s that I love cheering for a hero that’s willing to be shoved back into the grinder to find another killer of this violent magnitude – because he knows he’s good at it.

Whatever the case, the scenes of investigation here are noteworthy.  Consider when a guard at the prison is able to lift a piece of toilet paper containing a message that the Tooth Fairy sent Lecktor.  The way Graham’s investigative team pulls that evidence apart and rushes against the clock to use it and replace it in the Doc’s cell without him noticing… it’s phenomenal cinema!  And, that’s where the line that I used to entitle this post came from.  Will Graham is a powerful hero – but, unlike so many other cop dramas and action-adventure films, he’s not superman.  When he finally does talk his way into cracking the case, the combination of Petersen’s acting, Mann’s patient, long take and the superior soundtrack combine for one of my favorite moments in the movie.

So, whether it’s the unique color palate, the skin-crawling performances of the villains or the natural intensity of the movie’s investigation, I really encourage you to try this one.  I was surprised, when I did a recent audit of Ronhamprod.com that I hadn’t covered a Michael Mann film yet – and this one is a great start.  I’ll put it this way – if you enjoyed HBO’s True Detective, I’m sure you’ll dig Manhunter.

And, enjoy this link, which has a lot of images from the film, many of which really capture the color palate discussed in this post – IMDB – Manhunter Cast & Crew