When Was the Last Time You Tried Breathing Through Your Eyelids? 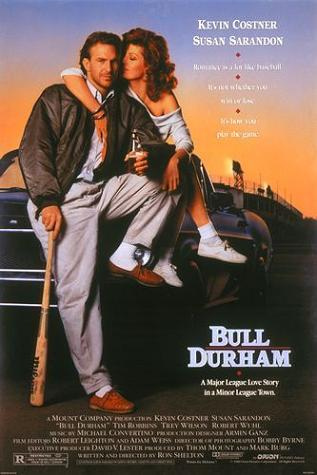 This comedy from 1988 supports my point that baseball is like wine – it gets better with age.  I’m watching more of the American pastime the older I get.  Part of my increased attention is surely related to Vin Scully’s call of the Dodgers here in L.A.  It’s his last year in a career that has spanned over 60 years, so, I’m listening to the legend as often as I can.  Another piece of it is how baseball has so many analogies to life.  These analogies are what make Bull Durham such a great film.

The film is about a minor league baseball team, the Durham Bulls, and one of their seasons as narrated by the unofficial mascot, Annie Savoy (Susan Sarandon).  She’s a local who has been watching the Bulls for countless seasons – and always has a romance with one of the players to accompany the season.  This year, she’s got a problem.  The Bulls have hired a lanky pitcher named Ebby “Nuke” Laroosh (Tim Robbins), a young man in serious need of mentorship if he’s ever going to control his pitching and make it to “the show,” or – cue the choir’s pitch-perfect, “Ahhhhhh” – Major League Baseball.  But then, that mentor shows up in the form of a veteran catcher named Crash Davis (Costner, in his heyday, 80s glory).  The Bulls manager, Skip (see note 1), has acquired Costner not so much for his catching ability, but to specifically coach young “Nuke” into behaving himself and reaching the hallowed ground of MLB.  In fact, Crash is on his last few seasons, and he knows it.

But the presence of Laroosh the pitcher and Crash the catcher puts Annie in a pickle.  She’s attracted to both guys and regrettably – as she explains to Crash in an early scene at the batting cages – is monogamous during baseball season.  So, when Crash and 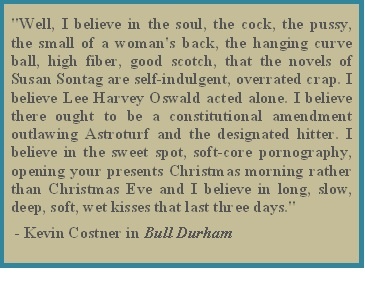 “Nuke” show up to her house for the first time, the veteran catcher simply dismisses the idea of competing for her attention and starts to leave.  For those of you who have seen the movie, his ensuing speech about what he believes is one of the great monologues in recent cinema – at least in the opinion of this humble blogger.  For those who haven’t seen Bull Durham yet, this is one of the scenes I think about when I beg you to watch it!  [And note the irony of how Costern’s character felt about Lee Harvey Oswald in comparison to another of his famous portrayals a few years later…]

Aside from the love triangle between Crash, Annie and “Nuke,” there are plenty of b-storylines that accompany the Bulls minor league season.  There’s the time Crash bets he can get a rain-out the next day.  There’s a wedding on the field one night before the game starts.  There are plenty of fights between Bulls players and players on opposing teams.  Another bit concerns Annie convincing “Nuke” to calm down when he pitches by “breathing through his eyelids.”  It’s these b-storylines that support the love triangle which remind me, in an odd way, of Thornton Wilder’s Our Town.

Regardless, the film has changed over the years the same way the game of baseball has changed.  I’ve grown older, I’ve gained perspective – and Bull Durham hit me differently in my latest viewing.  Think about it – the first time you go to the ball game, you’re SO impressed!  You’re probably thinking something like, “there are grown men out there.. in a field.. in UNIFORMS.. playing games – and earning lots and lots of money doing it!  And…… I get to eat JUNK FOOD while I watch them play?!?  This is the best thing since Halloween!  And it’s not once a year.. I can go as often as I can afford to!!”  But, that perspective changes over the years, right?

For me, in this latest viewing of Durham, the scene that resonated with me most was when Crash is trying to get “Nuke” to follow his signals.  I only recently learned over the past few seasons how essential the catcher is to how the game is played.  If there’s a quarterback equivalent in baseball, meaning a guy managing the game on the field, it’s the catcher.  So, in this scene, Crash is giving his pitcher classic pitching finger signals from between his legs.  And the young pitcher’s been doing well with his “heat,” or fastball, so… he wants to throw that pitch.  He gives Crash a head shake.

Now, Crash is angry.  By this time in the tale, Crash and “Nuke” have had their differences and arguments and even physical confrontations.  The veteran catcher can’t believe this “meat,” as he calls the rookie, is “shaking him off.”  So, he tells the rival batter that Laroosh is going to pitch a fastball.  Sure enough, here comes “Nuke’s heat.”  And the guy smashes it so hard, it hits this big sign in right field in the shape of a bull that says, “Hit the Bull, Win a Steak!”

Crash ambles towards the mound and says to Laroosh, “He sure hit the shit out of that one, huh?”  Or words to that effect.  He even admits to the young pitcher that he told the guy what pitch was coming his way.  And the scene got to me because of this shared information.  I’ve had the blessing of several different mentors in my life, and my experiences with them all had this kind of interplay.  The long and short is, they let me play it my way because I was SURE I knew better than them at the time.  It went horribly, humiliatingly wrong.  And they patted me back and headed back behind the plate.  And then, I started pitching what they suggested I pitch.

Well, I’m embarrassed to say this blog has kind of gotten away from me because I just love Bull Durham!  I went a little more personal than intended – my apologies.  Regardless, I think you can tell this film is well worth your time if you’re seeking a great comedy, a fun, raunchy romance or a baseball movie.  Have a drink and enjoy this classic – and you might be trying to breathe through your eyelids tomorrow.

Note One: Trey Wilson is one of those “character actors” that I always love to comment on, because frankly their body of work deserves attention.  These are the players whose name you may not know, but you definitely remember their roles.
Mr. Wilson not only played the iconic scene in Bull Durham in which he acts like a mental case (the “lollygaggers” scene – see below), he also was Nathan Arizona, the furniture store magnate whose youngest son is kidnapped by Hi and Edwina in the Coen Bros’ Raising Arizona!  Wilson was on Law & Order on TV, he was the villain in Twins with Schwarzenegger and DeVito – and even played Jimmy Hoffa in a TV movie!  Sadly, he passed in 1989 – but his superb work survives for us to enjoy.

Note: I own none of the images posted here, which are for entertainment purposes only.