Is That a Giant Worm? Oh… Must Be Dune…

This was one of those titles on my long running list, which is broken out by genre, star and other kinds of breaks.  It’s been on my list for years – and should have remained on it indefinitely.  Dune is, regrettably, one of those films that defies understanding.  When so many classic, proven stories make great films.. how did this one fall short?

Reflecting this age of supreme “behind the scenes” access, we’ll get to how Dune fell short in our very next post on the documentary, Jodorowsky’s Dune.  For now, let’s just say that 1984’s Dune, directed by David Lynch, is one of many films that begins and ends with the story.  Some adaptations, like L.A. Confidential, The Big Short and classics like The Godfather and MacBeth, are superb when they finally reach the silver screen.  Others, like The Hobbit, The Grinch and this, Dune, definitely fall short of the source material and sometimes deviate remarkably from it. 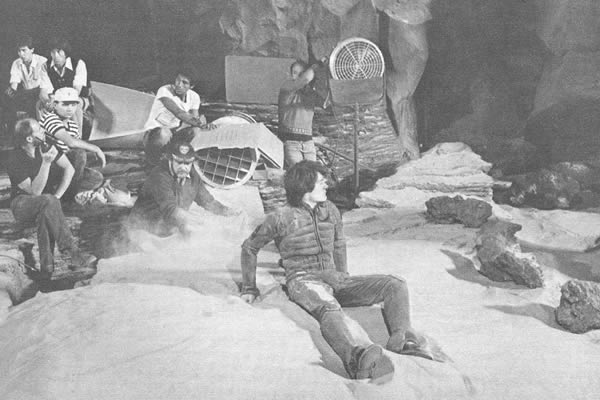 Dune was originally a 1965 sci-fi novel by Frank Herbert, which won the Hugo Award and is considered one of the best sci-fi books of all time.  Great start, right?  Well, the final, two and a half hour film I caught on Starz Encore earlier this month, was a muddled, confused bit of kitsch.  I hate picking on films – I really do –  particularly movies of this magnitude and scope!  I mean, you simply must give credit to the makeup, costume and design folks.  They definitely created a world, no matter how cheesy and obvious it seemed in some scenes. You also have to pat McLaughlin on the back for a job well tried.  He, and the majority of the cast, are dedicated to their roles.  And come on, give Lynch some credit for trying an inner dialogue for major characters, a technique that Terrence Mallick has executed in so many of his films.

But, all of this effort and production simply does not matter if we can’t follow the story and we have no understanding of why the characters are important.  In fact, let’s start with the idea that as I watched Dune, I had trouble telling WHICH characters are important.  My thoughts unfolded this way: “McLaughlin is playing Paul, so he must be important.  After all, he’s in most scenes.  Let’s see, umm… I though the emperor was important, but, haven’t seen him in a while.  I hope we see as little as possible of the Baron, that floating fat man who has the worst skin disease I’ve probably ever seen on film.  Gross.  Oh, wow – there’s Sting!  He MUST be important, he was in The Police around this time!  Well, no… guess not.  Wait, WAIT!  Is that Patrick Stewart!?  Well, he’s going to team up with Paul and hop on that giant worm, but… Hmmm.  Sorry, why was that important?”

That’s right, Film Fan, I said “giant worm.”  See pic at the bottom of this post for a screenshot…  The effects in Dune are politely described as “basic.”  Floating spaceships against flat backgrounds offer very little in the way of scope.  Props, explosions and laser effects seem like a throwback to 1950s sci-fi cinema in some scenes and downright unbelievable in others.

Like I said, I try to avoid being so critical: but here’s the key.  I wouldn’t CARE about the bad effects if I CARED about the characters and their struggle.  Look for an upcoming post on The Terminator.  Some of the effects in that 1984 James Cameron film are very basic based on today’s standards – but that film will remain a classic to me because I deeply cared about those people and their challenges.  The Day the Earth Stood Still from the 1950s, The Neverending Story and so many other 80s films all share these “basic” effects – but we care because the script was super solid.

So.. how DID Dune end up so messy when it had such incredible source material and the immensely talented cast and crew that it had?  In short, my thesis is simple.  To have a classic film, you need a combination of stars to align, certainly.  Sometimes, it’s that breakout role for a young star destined for greatness.  MacLaughlin could have been that on paper – not saying that he isn’t very talented and successful!  Just saying, his role in Dune didn’t lead to immortalit.  Other times, a film benefits from that insane vision from a director that is blessed with final cut.  Still other films just have beautiful timing, like In the Heat of the Night.  And regrettably, far too often, the vision just doesn’t come to fruition.  On that note, please, read on…