For anyone who has seen Best Picture winner The Departed as many times as I have, I’m sure you know what the title of this entry refers to.  First off, this film deals with the Irish in Boston, so it’s appropriate we offer our take on St. Patty’s Day.  Second, the early scenes of the film, which culminate with maybe the latest title card introduction in movie history, offers this exact question, as posed by Martin Sheen’s Captain Queenan:

Now, please, watch the film.  Even if you’ve seen it before, watch it again.  You’ll see that this line, as typed above, does the line no justice once Queenan’s thick, Boston accent is applied to this dialogue.  Much like the movie is a two edged sword dealing with the deception and difficulty in living a life full of lies, let’s look at The Departed from two angles – not only as a great crime thriller loaded with a cast of the highest calibre, but also as the kind of film that makes superb, social fodder among the moviegoers who adore it.

Center from left to right: Sergeant Dignam (MARK WAHLBERG), Captain Ellerby (ALEC BALDWIN) and Colin Sullivan (MATT DAMON) head up the surveillance team, including Brown (ANTHONY ANDERSON, seated far right), that is monitoring a meeting between CostelloÕs gang and the Chinese Triad in Warner Bros. PicturesÕ crime drama ÒThe Departed.Ó
PHOTOGRAPHS TO BE USED SOLELY FOR ADVERTISING, PROMOTION, PUBLICITY OR REVIEWS OF THIS SPECIFIC MOTION PICTURE AND TO REMAIN THE PROPERTY OF THE STUDIO. NOT FOR SALE OR REDISTRIBUTION.

When I first heard about this film, I thought someone was messing with me.  In my youth, Goodfellas had been one of my first rated R experiences.  I hated Casino at first – take it easy, guys – then ended up really appreciating it.  Let’s not even scratch the surface of Heat.  The point is, I absolutely relish the experience of watching epic crime sagas, which just happen to have everyone in Hollywood co-starring in them.  So, when I heard in the trades about The Departed, then confirmed the cast on IMDB, I nearly fainted.  I remember thinking, “…. and NICHOLSON, too?? Come on!”

So, when I went to Westwood on opening night in early October 2006, I had my hopes running awfully high.   And the experience did not disappoint.  Again, for those of you who’ve seen it, I’m sure you can appreciate how the audience of maybe 1,200 moviegoers kept gasping and crying out during the finale with the elevator.  I’m sure you’ll laugh with me as I remember the “teething… gnawing RAT…” delivery by Nicholson, which was beautifully placed, much needed comic relief. 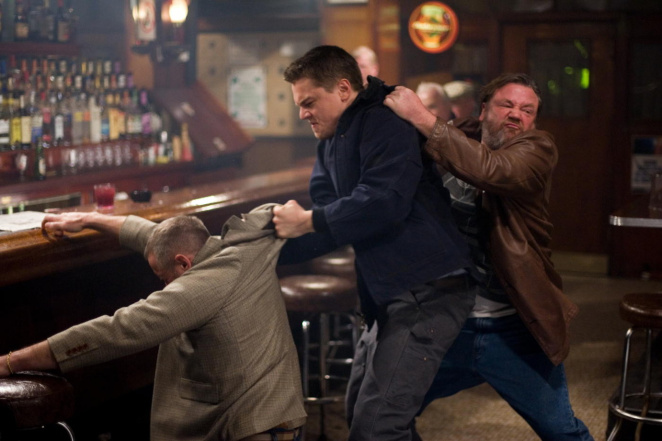 The Departed is about the truth, and the pursuit of truth always makes for a worthwhile film.  To villain Frank Costello (Nicholson), is Billy Costigan, played by Leonardo DiCaprio, a cop – or is he really an undercover cop that Queenan has planted in his organization?  To all his fellow investigators, is Colin Sullivan (Damon) the “worker” he seems to be, or will his shady behavior from time to time uncover something more?  Well, the superb set-up from writer William Monahan establishes the neighborhood criminal kingpin in Costello.  He’s been “mentoring” a group of young boys for years, and Colin Sullivan grows up under his tutelage – and becomes a cop that is willing to inform Costello of anything he’s interested in.

The “yin” to this criminal “yang” is Costigan, who is seen going through the same state police training program as the elder Sullivan does.  Quickly, they graduate and enter the police force.  But, there’s a problem for Costigan in that his uncle was a huge player in Costello’s organization who recently met his demise.  Captain Queenan (Sheen) and his lackey, Sgt. Dignam (Wahlberg, who steals many of the scenes he’s in) advise Costigan that, if he wants to serve the commonwealth, it’ll be in the midst of a special, undercover assignment that only the three of them will know about.  Because with his family’s criminal background, there’s no possibility Costigan would be a state police officer in even five years.

This story set up yields a film full of action, violence, corruption and wild visuals.  Scorsese and team – especially editor Thelma Schoonmaker, whose IMDB filmography is an overwhelming volume of movie hits – are firing on all cylinders.  Consider the question from earlier, which Costello was surely wondering about young Costigan suddenly entering his neighborhood.  What better way to find out the truth than break open the young man’s cast holding his broken wrist in place – and proceed to smash said wrist with the man’s boot?  That’s the kind of moment contained in this film.  And, much like other Scorsese greats, these scenes are equally superb as stand alones as they are the necessary piece of Monahan’s labrynth puzzle.

In watching the film recently, I was fascinated by the constant editing style, which offered two different perspectives within the same scene.  Consider when Sullivan is in the elevator at one point, and his Costello provided cell phone buzzes.  The shot goes completely 180 from above Sullivan’s head down below his waist and looking up.  It’s as if the film is visually reminding us that this man has just turned off “cop” and is about to turn on “criminal.”  Another visual consistency throughout the film is the “X” in the background.  In the DVD extras, Scorsese admits how he wanted to pay homage to 1930s gangster films, which would often place an “X” of some kind behind criminals who were guaranteed to join the departed by the end of the film.  Keeping an eye out for these makes for a fun rewatch.

And another item I noticed in this latest viewing was the part of James Badge Dale, who plays Trooper Baragan.  He’s one of the guys that Sullivan graduates from the academy with, and he plays a supporting role as one of Sullivan’s investigation team as the film progresses.  Particularly once you know the twist of the film, watching this character and his reactions and when the camera gives him moments throughout becomes really interesting.  It’s this character that links to another point I wanted to make, and that is that this movie is actually based on a Hong Kong film called Infernal Affairs, which was released a few years before Departed.  I was fascinated in watching that original how different the ending in, and how you could certainly argue that Monahan and The Departed’s filmmakers made a conscious choice to make this Best Picture winner’s conclusion much more western.

Lastly, I love to use this film as a great example of how movies and their dialogue become a social currency, particularly among guys after a few drinks.  I can’t tell you how many times I’ve said, “Why don’t you just get me a bottle of scotch… and a hand gun” in response to close pals asking how my week has gone.  I have asked and I’ve been asked at the bar, “you sure you don’t wanna make it a cranberry juice?”  And of course, the “do you want to be a KWOUP… or do you want to APPEAH to be a KWOUP” dialogue from Queenan early in the film became the go-to line between my brother and a close pal a few years back.  To its credit, The Departed won a lot of awards – but even if you don’t follow the accolades, it’s oftentimes the dialogue that you’re able to experience outside of viewing the film itself.