A very old movie for a very old season 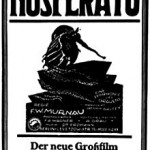 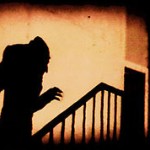 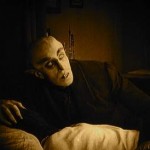 I think this must be the oldest film I’ve ever commented on, but it’s not the oldest movie I’ve ever seen: as if I needed to prove my film geekdom further, I know I’ve seen Birth of a Nation and even some of the first Edision and Lumiere brother films.  Regardless, I figured for this season of Halloween I’d have a peek at this “classic” that seems to be a fixture on all of the horror movie lists I’ve recently seen.

I think if you’re going to take the time to watch a film like Nosferatu, it’s important to kind of think of yourself in terms of an audience member watching the film when it was made, which for our purposes would be 1922.  What I mean is, if you watch this movie under today’s standards, it’s sure to make you laugh!  The acting is overdone, with no subtlety to it: but think of why that is – most of the actors no doubt came from theater or were simply asked, “Want to be in a movie real quick?”  Let’s think about the special effects: there’s nothing special about them by today’s standards.  Jump cuts and fades are used in the editing to show the vampire disappearing or quickly escaping in some scenes.  The cuts even suggest he turns into a bunch of rats a few times.  But again, the editing is pretty funny by today’s standards.  Sound?  There is no sound!  There are screen cards to display dialogue, but otherwise, the sound is purely a musical score.

So, what I’d encourage viewers to do is imagine themselves sitting in a huge, thousand-plus seat cinema in 1922.  You got your bowler on and your gloves neatly folded into your side pocket and your best gal in the seat next to you!  After watching a couple news reels, (it’s still too early for cartoons to play) Nosferatu comes up on the screen, along with the creepy organ music, which is played live, of course!  You’re kind of creeped out by the Count’s assistant, Knock, from his leering smile and crazy gray hair.  Then, you’re scared of the journey to the Count’s castle because you don’t have the internet.  Or TV.  Or even radio yet, probably.  All you have are a few books at home and the newspaper as your daily entertainment.  And all the ghost stories you ever heard probably came from your crazy Grandma who drank infinite amounts of tea and always had that annoying cough.  And now those stories of werewolves in the woods and goblins creeping down the hallways are coming to life on screen!

See what I mean?  I was thinking about that shot in which the villagers tell Hutter, the hero of the film, about the werewolves in the woods.  Then, there’s a cut to a hyena.  Now, I knew it was a hyena, but to the average 1922 audience, it probably could have been a werewolf for all they knew, thus scaring the crap out of them.  If you think further on this audience talking about the film for the next generation and so on, you can hopefully see why a film – that looks pretty funny by today’s standards – is considered a classic.

To give the film its due credit, there are some images that clearly have influenced generations of subsequent horror films.  For example, Nosferatu popping out of his coffin on the ship, and some of the shadows used by the cinematographer are indeed iconic.  It’s interesting to watch such an old film like this because you have that “a-ha!” moment of where some of today’s film techniques were born.

Final tidbit: I love good ol’ Robert Osbourne on TCM.  He informed me prior to my viewing the film that the film’s producers never secured the rights to make Nosferatu based on Bram Stoker’s famous novel.  They changed the names and details of the story, but it was clear to the court that it was Stoker’s work up there: so, they lost the court case!  Their penalty was to “destroy all copies of the film”.  Ruh roh!  But by then, the film had already been released and there were copies of it all over creation… so the only version people saw for many years were copies of copies of copies.  The version I saw had been restored painstakingly by a British company; but it left me to wonder how the musical score, played live on a theater organ might have changed the feeling of the film.