What happened to those “checks & balances” from Civics class? 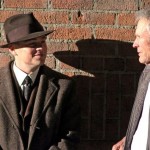 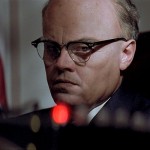 This film is obviously a biographical drama.  It concerns the story of J. Edgar Hoover, told from the man’s perspective as he dictates the more impressive highlights of his career to several different Special Agents in the twilight of his years.  J. Edgar is, for lack of a better word, bizarre.  It’s a very different biography, told in anything but chronological order, which in the end fits the delusional nature of its title character.

I’m not going to get too detailed concerning the “layers” of the movie because they’re consistent with all of Eastwood’s films.  What I mean is, from the cinematography to the costumes, from the makeup to the art direction, this film is extremely professional.  As a period piece, J. Edgar should be nominated for numerous awards.  In other words, when the story flashbacks require a scene with a young JEH wooing a young lady in a deserted Library of Congress, the film truly puts those characters in that place and time, sparing no expense to do so.

For me, however, the unique nature of the film begins and ends with Leonardo DiCaprio’s performance.  I’m not sure if some part of Hoover’s personality spoke to the actor or if he’s always been fascinated by this historical figure, but this is a noteworthy performance to say the least.  The preparation required for this role must have been extensive.  Hoover’s mannerisms, his speech, the way he holds his mouth in that downturned smile are all consistently displayed.  When we’re watching Hoover as he was in the 1920s and 1930s, he charges around the halls of justice, ordering agents about with a boundless energy.  However, by the time Nixon’s in office and he’s awaiting to be ushered into the Oval Office for yet another meeting with the latest President, the strain with which Hoover picks himself up off of the waiting room couch is fitting, appropriate and believable.  (See Note 1) However, I don’t think DiCaprio’s performance would have been as effective without the impressive makeup.

I’ll let you watch the film yourself to see what happens regarding the infamous portions of Hoover’s reign, including the rumor he dressed as a woman from time to time and had a monstrous “secret file” on countless politicians and celebrities.  The aspect of Hoover’s personality that hit me was his delusion.  Two pieces of his life contributed to this delusion, beginning with his Mom.  Judi Dench plays Mrs. Hoover, who honestly reminded me of Mrs. Bates from Psycho.  Poor old J. Edgar had no friends: he just wanted to make Ma happy.  Secondly, the film convinces you that no one – from surely the 1950s onward – ever, ever told this man, “Sir, you’re wrong.”  Never!  I was reading Kenneth Turan’s review and he said what I thought during one scene in Act Three: absolute power corrupts absolutely.  If you had upset this man, he would investigate you!  Again, Hoover was completely delusional.  His memory of events was terrible, but the film convinces you that he himself was convinced he had it right!  That’s a pretty tight, narrow line to tow – but the film makers do it masterfully.

I feel like I’ve dwelled on all the negative aspects of Hoover’s character, but I want to end with a clarification that the film does a great job of establishing some of the genuine good Hoover did for law enforcement.  While I think most viewers would agree that this is a cautionary tale, the more I think about this movie, the more I like it.  And despite its run time, the movie didn’t feel “long” at all.

Note 1: I heard some folks complaining about the makeup as I left the theater: to be sure, there were some scenes that contained a mix of makeup and lighting that was less than ideal.