Related to our discussion on film violence – Insidious & Drive 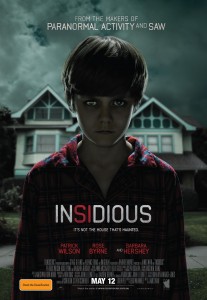 OK, I didn’t expect to return to such a recent posting so soon, but after my viewing of both Insidious and Drive, I figured it was a good idea.  Before reading on, you may want to refer to an earlier entry I did on the portrayal of sex & violence in film: http://ronhamprod.com/?p=572

Let’s start with Drive, shall we?  I saw the preview linked above about two months ago and started bouncing up and down on my chair in excitement: I marked the calendar and agreed with myself that “we” (the royal “we”, just this once) would go and see this title just as soon as it was released.  The story, as demonstrated in the preview, concerns an existential hero, “the Driver”.  He has no name, he has little feelings and few words – he just drives.  I’ve heard references comparing this character to Melville’s Le Samourai, which is a totally appropriate comparable.  While he makes legit money as a stunt driver, the opening scene establishes that he relishes those midnight drives in the car, helping criminals make their getaway.  Again though, he’s different in that he doesn’t carry a gun and explains his contract very clearly to potential clients before getting in the getaway car.

Anyhow, the meat of Drive‘s story concerns his next door neighbor, Irene (Carey Mulligan), her small boy and the return of her husband, Standard, from prison.  Standard owes some bad guys protection money for his prison stay, and a robbery results – involving the Driver – to pay the debt.  I was talking to a friend of mine who saw the movie as well, and he made a great comment that the chase scenes aren’t a moment too long: they have purpose and they don’t continue for minutes on end all over L.A. proper!

As you can no doubt tell by now, I really dug Drive.  For the most part.  I had seen one of the director’s previous films, Valhalla Rising, a few months ago, and was pretty impressed with how he brought the feel of a myth off the pages of an old dusty book and onto the screen.  That film also used minimal dialogue and impressive scenery to tell its story.  However… the violence in Drive is extreme and goes way overboard – that’s my opinion!  There are three separate scenes that show things that we already could imagine for ourselves from the intricate sound effects: as I said with Basic Instinct, there’s no reason to “show it all”…. in my opinion.  Let me finish Drive by saying I would still be terrified of The Driver without the visuals.

And now, let’s switch gears and discuss Insidious.  Between the two, this is the title that should be completely gruesome, right?  I mean, we’re talking about the writer/director team that brought us all Saw, not to mention six (6) sequels.  Insert open mouth, wide eyed face of surprise here: I don’t know about you, but having seen only the first in the series – which was plenty – I’m still digesting the fact there are seven total Saw movies.

Regardless, Insidious is about a wonderful little family and their recent move into an older house, a house in which each and every single door creaks.  I’m not kidding.  However, the creaks and the odd photographic angles within the house and the creepy musical score by Joseph Bishara (see fun fact at the end!) all contributed to the feelings of unease I felt while watching Insidious.  As I thought about the film in the days after I watched it, I was reminded of The Exorcism of Emily Rose, Blair Witch Project and Psycho rather than The Thing, Friday the 13th and A Nightmare on Elm Street.  Perhaps I just prefer the more psychological thriller as opposed to those splattered with blood and guts.  I guess I respect the production much more when it still has me grasping my chair (with the proverbial “white knuckles”), but with little or no blood in the film.

Fun Fact: the music composer to Insidious is also the actor that got made up for the part of the “lipstick face demon”.  Frankly, I couldn’t believe they put that shot in some of the TV spots I saw – you know the one I’m talking about if you saw the movie… when the demon is standing right behind Patrick Wilson’s character in the kitchen and Barbara Hershey reacts – like I did – by screaming like a kid on the playground?