It’s not about time travel 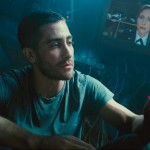 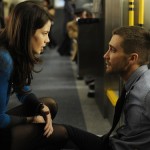 The credits start and there are numerous overhead shots of both downtown Chicago, and a commuter train headed for the city.  As the credits conclude, Jake Gyellenhaal’s character, Colter Stevens, wakes up – as if from a nap – on the commuter train, destined for Chicago.  The important thing to understand is that he has no idea where he is.  For him, it’s as if he just woke up in a completely different city and place.  The woman across from him, Christina (Michelle Monaghan) smiles at him, calls him Sean and says she took his advice.  A lady passes by and spills a bit of coffee on his shoe.  As Colter and Christina start to talk, they’re suddenly interrupted by the conductor demanding Colter’s ticket.  Then, the commuter across the aisle expresses his displeasure at the train being late.  Finally, Colter explodes in frustration, telling Christina that he’s not Sean, but an Army helicopter pilot in Afghanistan: how the hell did he get here?  There’s more: Colter disappears into the bathroom and sees a different man in the mirror!  So, things are really a mess by this point: Colter exits the bathroom, sees a very confused Christina there, asking him if he figured himself out yet – and then the train explodes!

Source Code is indeed very well structured: many screenplay books refer to this maxim, that if a script’s structure is there, the story kind of writes itself.  Regardless, once the train blows up in the film’s opening scene, we are taken back to a teeny tiny “pod”.  There, Colter is strapped to a pilot’s kind of seat, dressed in his Army uniform.  Apparently, the experience he just had was an insertion in to others’ collected memory of an event.

Try and stay with me here (believe me, I had to rewind and think about some of the bits of information dished out as the story progressed): Colter has been wounded in action, but he’s still able to help his country.  The commuter train he was on was indeed blown to bits earlier that morning.  The memories of all of the passengers have been assembled into this scene that Colter lived through in the opening scene.  The problem is that this train explosion is merely the beginning.  That’s why the Army wants him to go back in and keep re-living the same scene over and over again.  He’s got to find the bomb that blew up the train, or confirm that it wasn’t on board.  Colter also has to find the bomber if they were on board the train.

The film was a mere 90 minutes in length but I was on the edge of my seat for most of it.  Source Code is my kind of science fiction (see my post on Knowing): the kind where I’m not only entertained, but also learning as the story progresses.  I’m not wondering how they got the makeup on that weird Star Trek alien, I’m in the midst of a true adventure in a collection of memories.  I thought the director, Duncan Jones, kept the story rolling and the twists coming without seeming in a hurry.

In many ways, this title reminded me of old Hitchcock thrillers, with an “ordinary man” struggling to understand the dangerous circumstance he’s been thrown into.  This story even had a subtle, touching and efficient storyline concerning Colter’s father.  And while there was action and chase scenes and explosions, much like The Matrix, they were essential to the story.  It’s completely satisfying to watch a movie like Source Code, whose special effects and action are reliant on the setup and not inserted for effect.