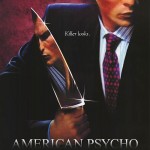 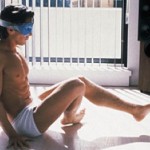 I feel like many mainstream actors share this type of role early on in their career: it’s edgy, probably violent or shocking in some way – more likely to be overtly sexy, if the actor’s a lady – and the actor in question completely sinks into their part.  American Psycho is one of those movies, and Christian Bale is obviously the actor in question.  With the Batman franchise, Rescue Dawn, Public Enemies and The Fighter to follow, this role – in my humble opinion – was Bale’s re-debut to the industry.  I say “re-debut” because he deserves a lot of credit for Spielberg’s Empire of the Sun, which he starred in as a boy.

(Spoiler Alert)
I guess I saw American Psycho on VHS when it came out ten years ago.  My only memory of my feeling towards the film was that I was glad I watched it merely for Bale’s performance.  The rest of the film was just awful!  At least that’s how I felt then.  Upon re-watching it last week, I feel much more positive towards the whole production: I guess, and it embarrasses me to admit this, I either forgot or didn’t realize that in the end, it was all Patrick’s fantasies we’d been watching!

Between the presentation of Wall Street style peer pressure to the handling of this man’s fantastic, violent episodes, the movie is a true indictment of the “live big” mentality being protested against in Manhattan just now (amongst other cities across the U.S.).  Think of the scene when Patrick busts out his latest business card: his name is in the middle, his title directly beneath his name, his phone number in the top right and company along the bottom (or something close to this layout).  As his associates display their cards, each and every one has the same information in exactly the same order, with only subtle differences in the card stock, color and fonts used!  And yet, Patrick is so convinced his card sucks compared to the others’ that he can’t take it and has to disappear into the restroom for a few minutes.  I think this scene might have been my favorite because I feel like I’ve seen business associates (and mere acquaintances – there is a difference, you know) react in the same way to fashion, personal comments and observations/opinions on movies!  So yes, this movie is worth a watch in the end, I suppose…  It is awfully violent, though – be forewarned.

Let’s get back to that “breakout” role: I think of DeNiro in Mean Streets, Russel Crowe in Romper Stomper, Malcolm McDowell in If and Eric Bana in Chopper and Bale in this one as some prime examples of these performances… Would love to hear from you on this topic!  What roles do you remember saying, “Can’t wait to see more of this dude!”