To quote an old phrase, “ignorance is bliss” 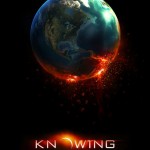 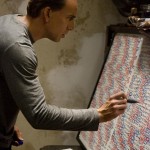 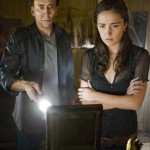 This title shares a unique quality with several others I’ve seen lately: I can’t believe how long it took me to see it!  Knowing is a phenomenal, fun, thought provoking, outrageous science-fiction/action-adventure.  It’s as good as some of Proyas’ other work, like Dark City, and even better than others in his filmography, like I, Robot.  I will cover some of the negative reviews this title received a little later.  But all in all, I feel like everything I’ve read on this movie is merely an opportunity to pick on Nicolas Cage… why?

Knowing is about a prophecy.  That’s really all it’s about.  The story starts in 1959 at an elementary school, with all of the fixings of a traditional, American school in the late 50s, meaning soft light, uniformed school children and exceptional teachers.  Of course, there is also a troubled young girl named Lucinda (see note 1).  In the first few minutes of the film when we meet Lucinda, she seems to be hearing voices.  Then, she’s staring at a creepy tall guy in a trenchcoat staring back at her across the playground.  Hmmm.  Um, where exactly are we going here, Mr. Proyas?  Later that afternoon, all the other kids are drawing pictures for a time capsule, which the school is going to put in the ground to open in 50 years.  But, instead of drawing rocket ships and stuff, Lucinda spends all of that time filling out both sides of an 8×12 piece of paper with very small numbers.  Hmmmm again.

Still in Act 1 (or, the first 25 minutes of the film), we go 50 years into the future, to 2009.  Recently widowed astro-physics professor and father of one, John Koestler, played by Nicolas Cage, is giving a lecture to his class at MIT.  Ah, the old MIT campus in autumn: I miss it so.  Just kidding!  Anyhow, the substance of the lecture is a suggestion towards the term paper: Koestler encourages his students to explore whether or not the universe is driven with purpose, or is designed completely by random.  This question is not nearly as bizzarre as you might think as its nestled in the story very well by Act 3.

In the very next scene, we’re still in Act 1: it’s really quite the set up this movie provides us.  Koestler is taking his son to the same elementary school to have the same time capsule opened up that was put in the ground in the opening scenes.  Of course, we’re already circling back to that, “is it with purpose or is it random” question when Koestler’s boy receives the envelope with Lucinda’s numbers on it.  Oh, dear.  And sure enough, the boy starts hearing the same voices Lucinda did 50 years ago!  Ho boy.

Come to find out that night once Koestler puts his boy to bed and places his Scotch glass right on the middle of the sheet of numbers that they do mean something.  In fact, these numbers account for not only the date of world disasters over the past 50 years, but also the exact number of casualties!  There are also some unaccounted numbers, which contain important information saved for later.  However, the big hook that leads us into Act 2 is that there are only three unaccounted numbers, which are unfortunatley predicting the future.  Ruh roh, Professor!

I was very aggravated to see that this script wasn’t nominated for an Oscar.  Think about it: on page 25 of this script, we have interesting and diverse major players introduced.  We have plenty of  intriguing bits of mystery that need solving: who are the creepy guys watching the kids, what do the voices mean, will the Professor be able to bend time and avoid catastorphes, when will we be introduced to the beautiful Rose Bryne?  And we have a very philosophical question that fuels the fire of this story.  Great stuff!

Now a couple of comments outside the film itself: first off, this is definitely a movie that works better WITHOUT having seen the preview or any TV spots.  Coming in completely fresh will really help your viewing experience.  I mainly covered the opening “act” of this film because I don’t want to give away any of its surprises, of which there are many.

And at last, I come to the critical mass’ opinion of Knowing: they hated it based on the old Rotten Tomatoes score of only 33%, which I find completely unacceptable.  While my boy Ebert and Todd McCarthy from Variety dug it, A.O. Scott of the NY Times wasn’t alone in bashing this title as a convoluted mess: were you guys even paying attention?  Too many screenings that week?  And aren’t these the same soap box screamers claiming that “Hollywood is all sequels and product placement and no original ideas”?  For crying out loud, you can’t get any more original than this.  And one more thing: quit picking on Nicolas Cage!  Let me ask you this, genius: how would YOU react if you were playing a Professor who ran across a bunch of numbers like he does?  Or your kid was in immense danger from strange, mysterious trench-coat wearing weirdos?  Much like my commentary on Jackie Brown, I have to advise those critical of Cage that he can’t act as he did in Leaving Las Vegas in every movie.  That’s why they entitled this film Knowing, so you’d know it wasn’t Leaving Las Vegas you were watching.  I think it’s safe to say all actors make some odd choices in material that interests them: but this was not that movie for Cage.

Note 1: Only if you’ve seen the movie, read on…

I thought it was a fascinating and bold choice by director Alex Proyas to cast young Lara Robinson in not only the role of the troubled Lucinda – the girl in the 1950s who writes out the numbers based on what the “others” are whispering to her – but also Lucinda’s grand-child, Abby – the girl who gets to go with the aliens in the end!  I certainly didn’t recognize the young actress in the role of Abby… it was just interesting and I can’t think of another movie that had a casting choice like this.