Can all my gripes be demonstrated in one film? Yes – The Losers! 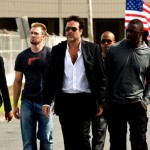 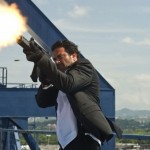 As the title of this entry “hints” at… I didn’t think it was possible for each and every one of my complaints with today’s movies to be demonstrated in one film, but in The Losers, they are.  In no particular order, here is the “issue” I have grown frustrated with and a (hopefully) brief clarification –

1) Great Cast with No Payoff – this, of course, is clearly my own fault.  I am a sucker, as I’ve mentioned in other posts, for a spectacular cast and oftentimes am voting “YEA” to the film before I even know what I’m getting into, just based on the mix of actors I enjoy watching.  With The Losers, they take a terribly gifted actor like Elba and squander his skills.  Ditto for Patric.

2) Overuse of Slow Motion – I’m not sure when music video direction entered the mainstream visuals of today’s movies, but I’m oh so tired of the “let’s show the team walking with their weapons in slow motion” shot – AND the “slow motion-FAST MOTION-back to slow motion” combination.  I guess a lot of today’s directors are either A) listening and obeying their superiors on the studio side that “this is a cool technique, kids love it, please use it” or B) are just repeating what they saw after countless viewings of the films of Sam Peckinpah & John Woo?  Either way, I have two words.  Over.  Used.  (See Note 1 for a special treat related to this comment…)

3) Establish (then RE-Establish for Those of Us Who’re Really Slow) that the Bad Guy is, well, a Bad Guy – we have Jason Patric as “Max” in this film.  He’s a bad guy.  You can tell by his white suit, the fact he works for the C.I.A. and his officiously delivered comments.  You can also tell when he orders his henchman to throw a businessman off a tall building.  That’s scene one with “Max”.  About ten minutes later, we get another scene – just in CASE you were grabbing popcorn at the time of scene one – in which he shoots an innocent girl for letting the sun get in his eye.  Literally.  I’m so glad the film makers have made clear that “Max” is bad.  Yep, “Max” is the bad guy.  Got it.  I was lost there for a while!

4) Teeny Tiny Woman (Maybe 95 Pounds Soaking Wet) Capable of Beating the Balls off Superman – Let me give some examples here from recent “video content”… Sarah Connor Chronicles on TV, Drive Angry (in 3D!), which was in and out of the multiplex quicker than you can finish your Oscar ballot, almost all Bond movies, and now, The Losers.  The fight scene between Zoe Saldana and Harry Dean Morgan reminded me of all those Van Damme movies in which the hero takes a lead pipe to the skull repeatedly, but is still able to beat up the villain because he’s still so angry about the villain whacking his brother way back when (I’m in quite a mood today, huh?).

5) The Good Guy(s) Fail TOO HARD – In the first scene of The Losers, a helicopter full of kids – 25 to be exact – is shot out of the air with a missile.  This super-duper Special Forces team we’ve just met was supposed to save them.  That’s too bloody far!  It’s like when John McClane allows a plane full of people to blow up in Die Hard 2: how’s that POSSIBLE!?!?!?  The whole point to a guy like McClane is that he exists to PREVENT that kind of thing from happening!  Seriously, consider the difference in the two examples I just gave you – then think about how Dirty Harry fails against the Serpico killer during their first meet, or how Obi Wan Kenobi dies in Star Wars…  With the first scene of The Losers, I’m asking myself, if these guys can’t save the day, why is there a comic book written about them??? Why was there a movie made???

6) Comic Book Movies in General – no doubt, I knew this was within the genre, I knew what I was getting into… But are they all “produce-a-movie-immediately” worthy?  I think not.  I’m thinking of recently released Watchmen, Kick Ass and Jonah Hex…  Don’t ever see Watchmen.  Watch your third favorite movie again instead.

7) Machine Gun Fire Does No Good – I have to credit Roger Ebert with expanding on this frustration much better than I, but there’s a scene in The Losers when the team is trying to land a helicopter on a Miami city street to grab an armored truck (of COURSE they are).  During this attempt, the aforementioned henchman fires what looked to me to be .900 caliber rounds at the helicopter.  For several minutes.  It’s only after the team latches on to the truck and the helicopter is nearly out of sight that FOUR ROUNDS hit the helicopter.  I see.  What laws of physics are you following in this film?  If you’re trying to tell me the henchman’s a really bad shot… then how’d he become The Henchman???

8) The Band “Journey” on the Soundtrack – I suppose that’s more of a radio media/karaoke complaint, but COME ON!  Enough already.  Matter of fact, let’s add the Rolling Stones “Gimme Shelter” to this growing list of most overused songs in movies and see how long we can make it.  And I LOVE “Gimme Shelter”.

9) Quitting on a Scene – What I mean by this is there will be an extraordinary set up followed by some action and then mid-point, we’re at sunset, or back at the hotel, or it’s the next morning.  My question is, “how the hell’d they get OUT of that mess????”  For goodness sake, don’t tell me this facility “is the most closely guarded on the Eastern Seaboard”, the show me how you get in just to give me a shot of you holding [the diamond] inside the confines of the facility and grinning at each other!  How the hell’d you get OUT of there???  Did the security of the facility say, “Aw man!  Shucks!  Well, you already got it, so, ya beat us!  There’s the exit…” In the example of The Losers, the computer guy on the team steals this thing, some hard drive or whatever, and building security sends THREE GUYS to collect him.  Three security guards?  REALLY!?!?!

10) And Finally, One of the Good Guys was ACTUALLY a Bad Guy the Whole Time – well, shut the town down and paint me yellow or whatever the saying is.  In the instance of Serpico, that’s the whole story, that’s why we’re watching that film: so that’s superb.  In another example, like U.S. Marshalls (the sequel to The Fugitive), you can kinda see it coming, but this infestation of a Bad Guy in Good Guy’s clothing doesn’t ruin the film.  With this film, Indiana Jones 4, S.W.A.T., Avatar and Toy Story 3, I think it’s safe to say that the Good Guy who’s actually a Bad Guy is no longer a twist: it’s an expected storyline.

All of these ten (I had no plan for there to be ten, you must believe me) are symptoms of the same disease I’ll call “Under Scripting”.  Let me use just one example I’ve alluded to recently: what’s the difference between the original film, “The Matrix” and its sequels?  The original film is a classic, right, while the second and third films of that series are… not classics?  Why?  Because in the original “Matrix”, all of the un-real things that Neo does are explained and supported by the “rules” and establishing scenes of the script.  In the second and third films, we were just watching a video game.  They were “under scripted” (weak term, I know).

Note 2 – all apologies to those involved in making The Losers: I’m a pretty diplomatic guy, and I don’t want to come across too harshly on the film.  The movie had its moments, I was entertained by some scenes and frankly, I knew what I was getting into.  I don’t mean to sound like such a grumpy old man with this post by using The Losers as my super-example!

One Response to Can all my gripes be demonstrated in one film? Yes – The Losers!