Fun action from start to finish 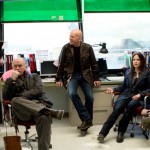 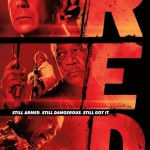 Sylvester Stallone had several big action movies in the 1980s: not exactly news, I know, but I say this to make a point.  I remember many of them starting off well, with a fun, establishing action scene, a love interest I could find interesting, too, and some bad guys worthy of getting pummeled by Stallone.  But then, well, things took a turn for the worst.  If the beginning scenes had established somewhat believable action, now in Act 3, we were into un-bee-LEEV-able action!  Why, you ask?  I don’t know!  If Stallone finally found the bad guy and had him in his grasp, he’d then murmur something – MUCH to my chagrin – like, “Naw.  You’re not worth the bullet.”  Or another of my favorite, “If I do this, I’ll be no better than you.”  Well, haw.  And not to pick on Stallone – there were plenty of other action icons with similar issues (anyone remember a certain Belgian named Van Damme, hmm?)

Long story short, RED, an action adventure from last fall, makes it very, very clear from the get go that this whole thing – the story, the romance, the action, all of it – is un-bee-LEEV-able!  So, either enjoy it, or don’t!  Actually, the “re-imagining” of The A-Team did the same thing last summer.  Both RED and The A-Team have opening scenes that show you this is a crazy, almost silly/cartoon action film.  If you’re into it, you’re going to have a swell time.

RED concerns a retired Bruce Willis, who still gets up early in the morning, still works out, but clearly has no interaction with the world except the soothing voice of his retirement fund’s customer service in Mary-Louise Parker.  He tells her his checks go missing on a monthly basis just to be able to chat with her.  It’s clear Willis likes talking to Parker (and who wouldn’t?) and she doesn’t seem to mind chatting with him either!  He’s well travlled: and it seems she desperately wants to travel.  When he tells her he’ll be in Kansas City later in the month, she surprisingly agrees he should call her when he arrives.  Aw!  Then, a team of black-ops/S.W.A.T. Team personnel shoot his house into swiss cheese.  No fooling!

Willis, of course, wipes out the S.W.A.T. Team of 10+ members and high tails it to Kansas City.  You see, as an ex-C.I.A. operative, he knows that the C.I.A.’s next move will be to wipe out anyone he’s talked to recently.  Three words: ruh roh, Parker!  Sure enough, we cut to Kansas City, from the beautiful Mary-Louise saying good-night to her latest travesty of a date (like I said, this is an unbelievable story!) only to find Willis, who she’s never met in the flesh, standing in her living room!

Off they go to New Orleans.  Then to New York.  After the Apple, let’s see my sheet her… I had to keep a list – oh!  To the Florida swamp, to Alabama… then Virginia!  And so on: in the course of these travels, Willis re-connects with other retirees like Morgan Freeman, John Malkovich and Helen Mirren.  Repective to the story being based on a graphic novel, these new characters entering the story from time to time really worked in its favor.  Of course, the inital bad guy (played effectively as ever by Karl Urban, who you may remember from Lord of the Rings and Bourne Supremacy) isn’t as bad as the REAL bad guy, played with a surprise by Richard Dreyfuss.

As if you couldn’t tell, I highly recommend this one.  I keep thinking about why and I think it’s because the theme of the film is effectively communicated and subtly played on throughout: retirement can be a bitch…  Morgan Freeman’s character has one of the best lines in the film surrounding all of the black ops and terrible missions he was on in his career, and how they all rival his having to live at a retirement home!

And ya know?  Another thing – the fact that this script wasn’t considered more highly for a Best Adapted Screenplay Oscar, instead of a certain animated film surrounding a toy box, well, it’s just too damned bad.

One Response to Fun action from start to finish