Two films in honor of Election Day and the World Series 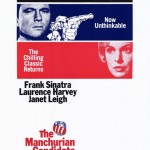 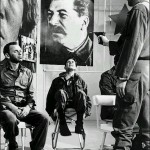 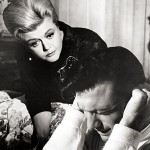 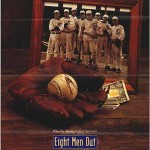 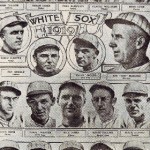 “Why Don’t You Pass the Time by Playing a Little Solitaire?”

Imagine a column of U.S. Army personnel sneaking around the countryside at night.  They’re led by this Korean guide named Chunjin.  All of this is in glorious black and white.  Moments later, the entire platoon is ambushed by another group of soldiers, put on helicopters and taken out of sight.  Skipping ahead a few months, one of the soldiers named Major Marco (Frank Sinatra) is back in Washington D.C.  He’s having terrible nightmares.  They involve a round table discussion between himself and several of those U.S. Army personnel that were kidnapped.  And they’re all talking to a Chinese doctor who looks like – these are Marco’s words – “Fu Manchu”.  During the discussion, the Chinese doc calmly and almost nonchalantly asks one of Marco’s men, Sergeant Shaw, to strangle a private in their platoon: Shaw does so without the private putting up a fight at all.  The dead private crumbles to the floor and Shaw sits back down, revealing a whole theater full of Communist personnel.

Such are the scenes that occupy The Manchurian Candidate, a political thriller that is hardly rivaled by any other paranoia story.  Based on the book by Richard Condon (which is also really, really good), Candidate covers the search that Major Marco undergoes to uncover just what the hell is going on with these dreams he’s having, and why several other men in the platoon are having exactly the same dream!  Further, whenever asked, these men all report that Raymond Shaw (the Sergeant who murdered the private for the entertainment of “Fu Manchu” and his audience) is “the kindest, bravest, warmest most wonderful human being I’ve ever known in my whole life.”  Um, are ya sure?

The Manchurian Candidate is an engrossing story because you’re constantly on the lookout for clues in the dialogue, background or flashbacks to tell you just what the hell is going on!  But I think a majority part of the movie’s success lies in the performances.  Sinatra had already won an Oscar for From Here to Eternity by the time he did Candidate.  Laurence Harvey completely exudes this broken machine of a man who is controlled either by his Mother or by his KGB handlers.  Janet Leigh is gorgeous, yes, but almost gives a creepy performance as Marco’s love interest, which only builds the suspense and tension: I mean, what kind of woman tells a guy she’s not married only to say later that “whoops, I’m engaged!”  You’ve got Henry Silva as Chunjin the Korean guide – and later Raymond Shaw’s butler: the fight scene in Shaw’s apartment between Chunjin and Marco is just classic (Sinatra using kung fu?  I’m in!).  There’s John McGiver as Senator Jordan, the political rival to “Iselin-ism” (read: McCarthyism) that is sweeping the country during the story.  And finally, you have sweet, dear old Angela Lansbury, who we all know from Murder She Wrote, right?  Uh, wrong!  Her performance as Raymond’s mother – aggressive, abusive, ambitious and murderous Mother – is in the top five of all female villain performances.  That’s right, I said that, I’ll stand by it.

It’s extremely difficult to toe the line between parody and drama, satire and political commentary: and yet, depending on how you’re feeling, you can view The Manchurian Candidate as a shining example of any of these flavors…  I’ve linked a couple of articles below that do a great job of discussing the little clues that Frankenheimer and the writers leave you as the story unfolds.  For those of you who’ve seen this picture, please read on with the links provided.  For those that haven’t seen The Manchurian Candidate, get thee to thy Netflix cue!

A Quick Note: Was this movie remade a few years ago?  Sure was!  With the Iraq War as the backdrop this time, director Jonathan Demme, Denzel Washington, Liev Schreiber and Meryl Streep all did an admirable job in the remake… but it doesn’t quite possess the thrilling aspects of the original in my opinion.  Perhaps the association with real-life Senator McCarthy was the missing link that put the 1962 version so over the top?  I don’t know for sure…

Last Note: It seems like every classic movie has a bit of a back story worth mentioning, doesn’t it?  This film is no exception.  While watching the DVD’s extras, I come to find out that one person owned the rights to this movie after its release – Frank Sinatra.  In other words, you could not see this film at all – in the theater, at home, anywhere – after its 1962 release until Sinatra finally decided to re-release it some time in the 80s.  Why?  Because Mr. Sinatra was so distraught over President Kennedy’s assassination – and the somewhat related assassination storyline of Candidate – that he couldn’t bear to see the film or allow it to be shown.  Needless to say, he finally came around, thank heavens.

One of the reviews I read of Eight Men Out was very astute in pointing out that the reporters in the film act as kind of a Greek Chorus, guiding us through the conspiracy of the 1919 Chicago “Black Sox” throwing the World Series as it unfolds.  The reporters, played by the director John Sayles and legendary writer Studs Turkel, stay with us from the introduction of the players in the first scene, through the games of the 1919 World Series and finally through Act 3, in which several of the players endure a trial.  I think it was a pretty clever plot device of Sayles to include himself and Studs Turkel as this “Greek Chorus”, previewing scenes, commenting on events as they unfolded and making sure that the audience is up to speed on what’s going on.  Sayles even has a scene in the middle of a crowded train car in which he none too subtly sings a song related to the team’s actions in the Series.

As I watched this title a couple of nights ago (I wasn’t about to watch Blackbeard the pirate – also known as Brian Wilson, closer for the S.F. Giants – toss the ball to close out the Series, no sir), I realized that Eight Men Out has a Cinema/Textbook example of “The Set Up”.  This portion of the script lives in Act 1: in this sequence of the screenplay, we should find out who’s the guy in the white cap, who’s the man dressed in black, who’s the girl tied to the tracks, and approximately how long till the train comes along to squash her?  This movie contains one of the most compact, efficient and entertaining Set Ups on film.  In this opening scene, a couple of kids run down the grimy streets of Chicago because the bigger of the two kids scored a dime and they can get bleacher seats to see the Sox win the pennant.  Re-read that sentence to see how much the game has changed from then to today.  Now that you’re with me again, the kids are at the game, and now they’re hustling the spectators, crying and carrying on until they’re given nickels to “shut the hell up”.  But as these two street urchins watch the game, they’re introducing us to a couple of players.  Then the owner, Charles Comiskey, introduces us to a few more players as he brags about the team he’s assembled, and how only a moron would bet against them in the Series.  Finally, you’ve to the Greek Chorus of reporters commenting on still more players.  By the end of the first 12 minutes of screen time, we know that Buck Weaver at third (John Cusack) hates, despises, can not BEAR to lose.  We understand that “Shoeless” Joe Jackson (D.B. Sweeney) in the outfield is an incredibly gifted star who can’t read.  We’re aware that Chick Gandil (brilliantly cast with Michael Rooker) at second base is a sneaky bastard who has no morality whatsoever.  We’re even in on the fact that veteran pitcher (often-used Sayles actor David Strathairn) Eddie Cicotte feels slighted by old man Comiskey’s cheap ways and reneging on bonuses.  Again, at the end of the opening 12 minutes, we are curious as all hell to know how this thing is going to unfold…

Eight Men Out has numerous other elements of brilliance.  There’s a scene at the midpoint in which different characters involved in this conspiracy to throw the Series raise the level of tension and propel the story further as they pass each other in the hallway of a hotel, going in and out of various rooms, almost like a Bugs Bunny scene.  Another scene concerns more of a philosophical discussion between a World Champion boxer and the professional gambler who made umpteen thousands of dollars off the Champ.  There is a very subtle and tragic dichotomy between the Joe Jackson character and Buck Williams.  And the conclusion of the film is as efficient and tragic as the rest of the film.  The ending invokes perhaps the superlative feeling of regret in the viewer: I know I thought to myself, “Gee, I wish these guys hadn’t acted this way.”

I know I’m like a lot of people when I sometimes wish for the “good old days”, when “people were nicer, you didn’t have to lock your doors”, yadda yadda yadda.  Stories like Eight Men Out remind us that people have always been people.  There has always been temptation.  There has always been a desire to screw the boss, exploit the latest technology, “get fat with everybody else” and take that bonus whether you deserve it or not.  Watching this film gave me the same feeling I felt when I heard that one guy used steroids to win his Olympic sprint.