A movie fit for a midnight show – Zardoz 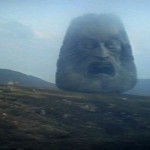 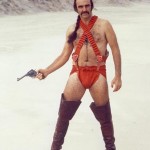 Zardoz (1974)
Dir: John Boorman
Stars: Sean Connery, Charlotte Rampling and a bunch of others I never heard of…

I was talking to a pal a few weeks back after he had read my Convoy entry: he was hoping I’d have more 70s movies that he never heard of to comment on.  M.M., this entry is directed at you!  Anyhow, when I was in high school, my brother got me a book covering all the films that Sean Connery had been in to date.  It’s a great book because it showcases what a diverse actor Connery is – particularly outside of the world of Bond.  One of the movies covered was this one, Zardoz.  Seeing the production photos from this film in the book, I was pretty intrigued.  But at the same time, it’s Connery in little more than Speedos and thigh high boots sporting a moustache and long braided hair.  So, this title didn’t exactly drift to the top of my list of Connery films to see.

But, I saw it was on Fox Movie Channel a few weeks back, so I TIVO’ed it.  I’ve been scrolling through the thirty or so movies I have sitting in my DVR’s memory for the last several weeks, and every time I scrolled through Zardoz, I thought, “Meh.  Not in the mood for that one.”  Welp, I got home on Friday night from a haunted hay ride (that’s another tale) and scrolled through the DVR once again and thought, “AH!  NOW I’m in the mood for this.”  Long story short (too late), Zardoz is a midnight movie: I know because it was well after midnight when I started it.  These movies require their audience to be extremely intellectual, high on something or inebriated – or perhaps a healthy mix of two or more of these elements for some audience members.  I’m not in any way suggesting that you run out and Netflix this title, grab a big bottle of your favorite poison and dig in.  In fact, I can’t think of one person I would actually recommend this title to, it’s that bloody bizarre of a movie.  However, that’s what makes it a midnight movie: those of us who have seen the faithful viewers of Rocky Horror Picture Show in action know what I’m talking about.  It’s the same type of folks that watch Clockwork Orange or Donnie Darko (stay tuned for reviews of these two) in their basement at 3am.  These films are made for a cult audience and are suited for late night viewing.

To John Boorman’s credit, Zardoz is a thought provoking picture.  It’s clear this guy knows what he’s doing with films like Deliverance, Point Blank and Excalibur to his credit.  Outside of the sincerely delivered expository dialogue, outrageous costuming and sets and hilarious – and I mean, HILARIOUS – special effects, there is some good food for thought presented in Zardoz: what if, two hundred years in the future, people were living so long it was like they were immortal?  As soon as someone told you, “you’re never going to die, never going to leave your human body”, wouldn’t you want to die?  So, yes, some interesting questions here.  But if you watch the trailer below, you’ve basically seen the film.  While Zardoz is an exemplary “midnight movie”, my recommendation is that you enjoy the trailer – and stop there.

In closing, I have to tell you that I am absolutely shocked – shocked, I tell you – regarding two elements to this film.  Number One – it stars Sean Connery.  I know I’ve already mentioned this, but when you see the trailer you’ll know what I mean – this is not exactly an “A-List star vehicle” to use industry terminology.  It’s a bizarre picture that I’m sure, had they read it, Paul Newman, Robert Redford and Al Pacino all would have passed on at the time!  Number Two – it is released by 20th Century Fox.  Not an independent studio, not an independent producer, not Roger Corman, but a major f’ing studio!?!?!  When I read Roger Ebert’s review of good ol’ Zardoz, he supposed the reason 20th released it was John Boorman’s capital at the time.  Having directed Deliverance to the utmost success, Boorman had carte blanche to do whatever he wanted.  Well, this certainly includes it all, doesn’t it?