Despite its “interesting” poster, a most compelling drama 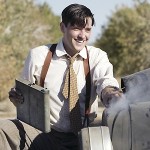 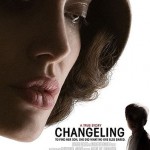 I am making it a special point to tell you that this film is very closely based on a true story.  Mr. Eastwood is very clear about this fact in the opening credits.  The reviews and background I’ve read about this film online make it obligatory for me to follow suit and point this out too.  Frankly, with this information in mind, the revelations and twists that this story takes as it unfolds makes it all the more jarring to the viewer.  The obvious parallel to my earlier entry on Taken is the storyline of child abduction: I promise I won’t make this my theme for October!

That said, I simply cannot imagine what my reaction might be to a family member (I’m not a dad, so I don’t have that perspective) disappearing without a word.  Try and put yourself in the shoes of Christine Collins in March of 1928.  When you return home from a Saturday shift you were obliged to take at the phone company, you discover your only son is missing!  The child has no father: it seems this dad ran off and away from “responsibility” as Collins explains it to her son.  At this point, we come to the first “I cannot believe it” moment in the story: the Los Angeles Police Department (see Note 1) will not help Ms. Collins.  I kid you not, the bored officer coldly explains their policy to Collins over the phone, that most kids “turn up” within the first 24 hours after they “supposedly” go missing.  Essentially, the L.A.P.D. doesn’t have the resources to start looking after everyone’s kids.  This is an incredibly difficult scene to watch, all the more because Angelina Jolie’s character is the only person in the frame and she’s simply reacting to the officer’s cold words regarding policy.  This scene speaks volumes about her acting ability, in my opinion: let’s just say that Jolie makes this role, like A Mighty Heart, easy to take for granted.

The true crime nature of the story is just getting started, however.  I’m not ruining anything for you as I tell you that months later, the police receive a call from Illinois with word that the Collins boy has been found and they’re sending him back on the train!  Fantastic, right?  Well, not so much when the boy shows up – and it’s not Christine Collins’ son.  “Ruh roh,” says the L.A.P.D. Chief.  He wants the whole thing to go away because their finding the young lad has been the one thing the department HAS done right lately.  But the kid isn’t hers, not even close, as Ms. Collins discovers.  The boy they send home with her has shrunk while he was away based on the measurements Collins took with pencil on the kitchen wall.  There is another confirmation that I won’t reveal here: the point is that the L.A.P.D., led by Captain J.J. Jones (played with awesome ferocity by Jeffrey Donovan of TV’s Burn Notice), insists that Collins is a disturbed woman, an irresponsible mother and has no business bothering the very department that helped locate her son.  This Captain, friends, had brass cojones.  The story continues from here with two separate sub-plots that again, are too incredible to believe as true.  I think it’s better you go in not knowing what these sub-plots are.  I also think you can tell this film moved me.  Reading the paper each day and watching the news, I think it’s natural to think to yourself, “Man that’s tough that thing happened to that guy, but it would never happen to me!”  I felt like Changeling did a great job of challenging that very thought, and being thankful for one’s blessings.

One of my first entries was on Unforgiven.  I think having seen this film, Million Dollar Baby, Gran Torino, Mystic River, Flags of Our Fathers and Letters from Iwo Jima, you’d be hard pressed to deny the fact that Eastwood is one of the best directors in film history.  His attention to detail without sacrificing the overall flexibility of the film is unparalleled.  Consider the performances he gets out of these character actors you might not have seen before – Michael Kelly as the Detective and Jason Butler Harner as a killer.  Consider the production design and energy it took to re-create late 20s Los Angeles, complete with red cars rolling up and down city streets!  Mr. Eastwood even composed the music to this drama.  In short, if we were playing the game in which you ask your pal, “Which five people – living or dead – would you like to have dinner with”, I’m pretty sure Clint would make my list.

Note 2: About my title for this entry… have a look at the poster for this film.  It does NO GOOD for the movie!  You tell me with a straight face that it doesn’t look like Angelina is about to devour her son?!?!?  And if you didn’t know any better, what would you think this film is about?  A Grimm’s fairy tale?  A costume party?  Believe me when I say that every little ingredient either helps or hurts a film’s chances – the poster for Changeling… DID NOT HELP.

One Response to Despite its “interesting” poster, a most compelling drama