A Comedy with a Double Meaning

This super-fun comedy is available right now on Netflix, and there are several things it has going for it.  A Futile and Stupid Gesture concerns the story of the National Lampoon, the infamous printed magazine from the 1970s that some can say was the foundation of some of the 70s and 80s funniest films, not to mention sketch show Saturday Night Live.  Mind you, I’m not making these claims – these are suggestions made by the film…  And, for the record, the poster here is a riff off of one of Lampoon’s more infamous magazine covers, which involved the same pistol – but a poor little puppy in place of Mr. Forte!

What I like about Futile was its balancing act between truly funny chapters in the Lampoon history, and these heartfelt, dramatic moments where you just wring your hands in frustration for Doug Kenney, the center of the story.  Kenney is played by Will Forte, who with his recent roles keeps convincing me he’s one of the more under estimated actors of this generation.  For example, one of my main notes of hesitation in seeing Alexander Payne’s superb family drama, Nebraska, was Forte’s inclusion in the lead role.  For the record, let me just say – how wrong I was!  And, Futile is no exception to this rule.  It seems Forte is able to handle both the comedy, which we knew from early on in his career, and the dramatic aspects of the role.

Kenney’s story starts all the way at the beginning, as it does in a lot of “did you know” styled biographical films.  But, the inclusion of Martin Mull as his narrator is an example of great, artistic writing design.  For those of you who knew Kenney’s story before Futile, you’ll know what I mean.  Regardless, it’s also Mull’s charm that lets the film get away with some of its really funny moments, like when they introduce many of the writers for Lampoon.  Soon after, they also show us the cast of the radio show, including stars early on in their career like Bill Murray and Gilda Radner.  It’s at this moment that Mull enters frame and basically calms the audience down, with a comment similar to, “Oh, you don’t think this guy looks like Bill Murray?  Well do you really believe Will Forte is 27 in this scene?  As matter of fact, here’s a whole list of other items we changed or altered for screen time and to make this thing more interesting….”   And then, a scroll appears onscreen!  Long story short – I love the film calling out today’s audience of “fact checkers.”  It’s like this comedy is saying, “leave it for politics!” 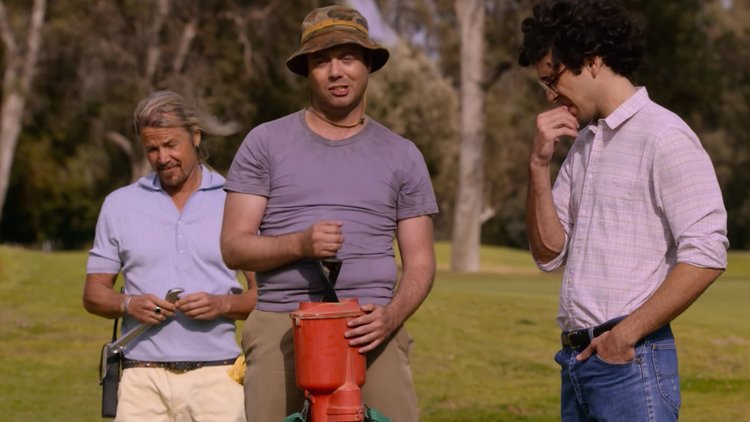 Finally, Forte’s performance is made easier I think by the immensely talented – and recognizable – cast.  In fact, you might say Futile and Stupid is worth a watch just for the fun of playing “who’s that actor?”  The movie is so chock full of fun appearances and cameos that it really rolls along.

If I had a complaint with the film, I think it’s one we all share and lament – Kenney, like so many other talents in our beloved entertainment industry, left us too early.  I wish I could crack the code on how to cheer up the “sad clowns” like Kenney and others like him.  Anyhow, I was impressed how the film shows his decline, and sorry to see that some of his friends were actually culpable in his self-destruction.  It’s rather rare to have a comedy that makes you laugh – and makes you think the next day, too.

Also on Netflix is Drunk, Stoned, Brilliant, Dead: The Story of the National Lampoon, which is a 2015 documentary covering very much the same subject, but with a more formal presentation.  Now, Netflix is claiming I’ve seen this film – but I’ve no memory of doing so!  However, having seen Futile, I am quite interested to see how the facts and fiction do compare… IMDB – Lampoon Documentary

IMDB Link to A Futile and Stupid Gesture