Living Through the Darkest Hour

With the Academy Award nominations nearly upon us, I feel like it’s a great time to talk about Darkest Hour.  There were several aspects of the film I thought played very well, especially on the big screen.  And, with Mr. Oldman a shoe-in for a nomination, now is as good a time as ever to see this compelling, entertaining historical drama.  There are so many fascinating sub-chapters to WWII history that have been adapted for the big screen, and Darkest Hour certainly deserves insertion amongst these volumes.

When you think about British Prime Minister Winston Churchill, certain characteristics no doubt pop to mind.  My first introduction to Mr. Churchill may well have been dining at Churchills on the Queen Mary when I was vacationing with my family back in 1988.  There was his image, complete with that genuine, grand-fatherly smile, that subtle little hunch in his posture and that balding head.  As I got more interested in history and came to know more about Churchill’s essential part in winning the war in Europe, more of these characteristics entered my perception of this icon.  All of which makes Mr. Oldman’s performance a superlative example of biographical portrayals.  Everything from the makeup to the posture to the pattern of speech to his costumes transforms the actor we’ve watched all these years into the Prime Minister, the grand lion himself.  After a while, I bet you’ll stop looking for the “fat suit” or the makeup – because they’re seamless.  Oldman simply is the man.

And, he is the man in May of 1940, a veritable sliver of Churchill’s voluminous history.  Part of why the film deserves so much credit, in my estimation, is that it doesn’t bite off more than it can chew.  Darkest is not a three and half hour epic that attempts to translate key episodes in the early life of its main character to foreshadow and somewhat explain later chapters.  Instead, its thesis is that Churchill and the European theater of WWII shared a “darkest hour” in that month of May 1940.  Fair enough – and refreshing to take in a more abbreviated take on an iconic character, even if I was craving more by the end!  And it’s by focusing on this limited amount of time that we get some enormously interesting details.  For example, I had no idea that Winston had been appointed Prime Minister the same month.  For as much political clout as he had, the man was dramatically tossed into a most desperate situation.

The last element that I’ll speak to towards hopefully convincing those of you who haven’t seen Hour to see it in theaters is the phenomenal cinematography by Bruno Delbonnel.  The design of the visual scheme most definitely puts you in the period, whether it’s the dust of battles, the harsh, overhead luminescence of the underground wartime offices or the softer glow of Buckingham Palace.  Take a look at how different the light feels when Churchill visits with the King compared to when he holds meetings with his wartime cabinet… Also, Delbonnel goes further with a true visual representation of what it must have felt like to be Mr. Churchill in those desperate days.  Much like being backed into a corner, totally isolated, most alone in his political views and his social circles, Delbonnel and director Joe Wright take the opportunity several times – without over-doing the effect – to visually illustrate Churchill’s lonely state in those days. 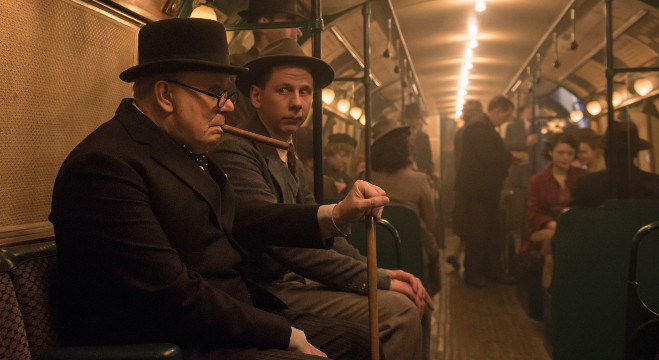 All told, this drama turned left when I thought it was going uphill.  Hour kept me on my toes – and gave me the greater, almost patriotic feeling of envy for living under truly great leadership.  What with the government shutdown only hours old, perhaps I felt more compelled to draft this entry as counter-programming to some of the stories we’ve seen in the news media as of late.  How refreshing would it be if one of our representatives showed up at our workplace, or on the train, the bus or at the grocery?  See Darkest Hour to see what I mean…

Final Note: the following day after seeing this title, I had a serious craving for a glass of champagne and a foot long cigar to accompany my breakfast…