What’s the Best Movie Channel… Ever?

I recently heard about this documentary title through a friend.  She and I worked together at my previous job, and had had discussions surrounding film on and off at company social events while I was there.  As you might have guessed by now, movies tend to come up in conversation when I have a drink or two.  Crazy thought, I know… but true!

Anyhow, I come to find out that this pal of mine was an associate producer on Z Channel: A Magnificent Obsession.  Not only that – she attended Cannes back in 2004 to showcase the film!  How cool!  So, I went onto Amazon, found this title for a few dollars and had a watch this week.

I don’t know about you, but when I think of documentaries, I think of an afternoon at the museum.  Or maybe attending live theater – or the ballet.  I have to be in the mood.  But as soon as the picture starts, I’m always glad I decided to watch.  Z Channel was no exception – particularly for a film maniac like myself!  It’s like this film was made for me.  For everyone, though, I think we can agree that this is a very adept presentation of an important slice of film history.  Bear with me here, but having watched this film, I think several products that we take for granted today were kind of born out of Z Channel.

The film covers the first pay cable station in the country, which launched inselected neighborhoods in Los Angeles back in 1974.  Reception to local TV stations was really difficult for some residences in the hills and canyons around town, so cable TV provided a reliable alternative for a few dollars a month.  Z Channel was one of those networks you could add to th

e subscription.  It offered a variety of cinema including not only box office hits, but also lesser known world cinema titles.   Under-appreciated titles from well known producers and directors and a bizarre, eclectic and diverse mix of “midnight movies” characterized this outlet’s offerings.

So, there are film buff movies, and then there are film buff commentaries… and this film is both.  It was an absolute treat to watch the odyssey of Z Channel, which was in a way, the precursor to the way we watch TV.  In fact, you might say it opened new distribution models for theatrical films which hadn’t gotten a fair shake at the box office.  There’s an entire sequence within this doc, which describes how movies likeThe Wild Bunch, Heaven’s Gate and

Once Upon a Time in America were released widely in a very abbreviated capacity.  In other words, Sam Peckinpah, director of The Wild Bunch, turned in a copy of the film that was close to three hours.  It was – and remains – the right of the studio who financed the film (in this example, Warner Bros), to shave it down to something closer to two hours.  But, the programmers at Z Channel felt that audiences might not understand the film as well as they would the longer original!

So, Z Channel became one of those bastions for film buffs, cinema students and movie geeks – not to mention established moviemakers like Robert Altman, Michael Cimino and other heavyweights from the 70s and 80s.  At its core was the network programmer, Jerry Harvey.  What the film makes you appreciate about Jerry’s character was his insistence on seeking out films that everyone should see.  Even if it was from his own unique perspective, I have to admit… I agreed with many of the titles mentioned in Z Channel’s catalog – as in, “Hell YEAH everyone should see that!”

For example, If a film failed at the box office, but had an alternative cut, Jerrywould seek out the reel and air both cuts!  In fact, you might say that Mr. Harvey executed the first “director’s cut,” which is a DVD “extra” we’ve become very used to.  He also was partially responsible for James Woods’ nomination for the Oliver Stone directed feature, Salvador.  This pic 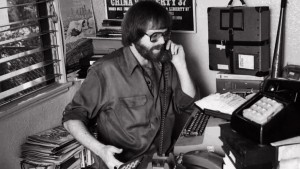 ture was another example of a film with a legitimate story that didn’t find an audience in its brief theatrical run… but Jerry thought it was incredible!  So, he aired it on Z Channel several times – and Woods ended up subsequently receiving an Oscar nomination for his performance.  Again, we’re used to a world where Academy “screeners” are sent and members choose based on the films sent to them… but I think we can agree that Mr. Harvey was ahead of his time in his apparent thinking, “If we air it… they will come.  This film will find it’s audience…”

The film was a treat for me not only because of its interesting subject matter, but also its fun-tactic interviews.  I mean, there’s Alexander Payne, wearing his Z Channel shirt, which he received after he wrote into the station a letter of strongly worded feedback long ago.  There’s Mr. Tarantino, ranting and raving about a foreign film I’d never heard of.  There’s Mr. Altman, quietly explaining the importance of having an outlet where the film community can watch and learn from an eclectic mix of titles…

So, while this title may be difficult to find, it’s worth a purchase on Amazon if you’re a film fan!  There were surprises and some especially tragic elements to the Z Channel story that I hadn’t expected… but in the end, I watched this documentary on the edge of my seat.  While I don’t predict that kind of engagement for all of you, I still say this is well worth a watch!

Note: I don’t own any of the images within this post.