On the Eve of This Year’s College Football Season… 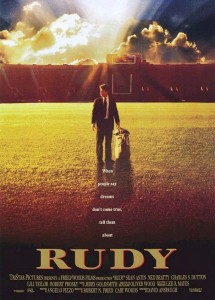 *** Special Note: if you’ve never seen this film, please don’t Google it or watch the preview… You’ll thank us later. For those of us who have seen it (probably several times), are we alone in our disdain of the poster on IMDB, or the image displayed on the DVD cover?? It seems like a real disservice to the audience who hasn’t seen the film… Would love to know your thoughts on that sentiment! ***

For those of you who know me, you know that on many Saturdays from September to early December, I’m probably out of pocket for much of the day. I always intend to limit my viewing, to watch only the “big game” that day. I’m referring to the one that’s been hyped all week – the LSU/Alabama or Oklahoma/Texas or #1 vs. #4 kind of match ups. However, in my excitement, I usually begin my viewing much, much earlier… I live in L.A., and our games start at 9am out here. And before you know it, I’ve blown the morning watching Northwestern/Purdue go to overtime, or taken in Oregon State upsetting USC – or some other unscheduled College Football craziness that invariably occurs before the “big game”… And that’s right, I capitalized College Football. I’m a sports fan, but I easily place College Football at the top of my favorites list.

The 1993 film Rudy depicts why I have such an affinity for the sport. Oftentimes, the drama that unfolds on the field is equal to or far short of the drama that preceded the game. The film is about an undersized Indiana boy, who dreams of running out of the tunnel and onto the hallowed ground of the Fighting Irish’s field. He announces to his fam 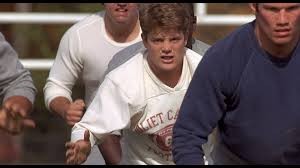 ily as a boy that he’s going to Notre Dame. And further, he’s going to play football there. Now, I understand the reaction of the boy’s father, played dutifully by Ned Beatty: his head droops downward until his chin rests on his chest. He’s only trying to protect his son from disappointment because he knows A) Rudy is NOT the best student – in fact he struggles… and B), Rudy is a teeny tiny little man. He has neither the body frame nor the brains to be a Notre Dame football player.

And that’s really what the movie is about, the perseverance of Daniel “Rudy” Ruettiger as he strives towards his goal while his family, his girlfriend and most of his friends consistently advise him against pursuing this “dream of his”… I think we all see [insert hero here] when we’re young, and we want to be like that. At least for a while. At least until we find out exactly what it’ll take to do [insert whatever the hero does here]. For me it was James Bond. I really thought that’s what spies did. Then I read a LeCarre novel, and… I decided not to be a spy.

Regardless, part of the joy of Rudy is watching Sean Astin in the title role as he constantly works out… as he asks questions of the priests at Notre Dame, “How do I get to go to school here?” and “Am I praying enough – is that the problem? Because I can pray more!” Rudy even gets a job working on the hallowed ground of the field where he meets Fortune, a grounds keeper who mentors Rudy played by Charles S. Dutton. One of the best scenes in the film is between Fortune and Rudy when we find out about Fortune’s history with the football program. In fact, the film is sprinkled with quality scenes between those trying to help Rudy reach his goals – and those trying to squash his dream. To the filmmakers’ credit, these scenes are evenly sprinkled throughout – just the right amount of “don’t do it, kid!” messaging to Rudy contrasted with, “whatever you do, don’t quit, man!”

You often hear people leaving the theater say, “I liked this movie… I wanted to root for this guy!” That’s really Rudy in a concise sentence. You can’t help but grin at the kid as he gets on a stool in the locker room and starts to 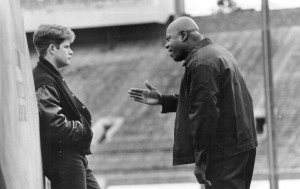 imitate one of the team’s old coaches’ legendary speeches, which he memorized from listening to it on a record player as a kid. You nod to yourself as you see Rudy running around the stadium, keeping himself in peak condition as he anticipates a positive letter from the Notre Dame admissions office. You may tear up as he receives those letters.

The ultimate compliment to the film and its director, David Anspaugh – who I’m sure gets just as much credit for directing another great sports film, Hoosiers – is this… Personally, I can’t stand Notre Dame football. I won’t disclose the specific reasons here other than to say I’ve always been a fan of the underdog. The point is this – when I was confessing earlier to just how much of the College game I watch throughout the fall, I will consistently carve out time on Saturdays to watch Notre Dame – and always cheer for their opponent, unless somehow the Irish are playing a team I need to lose for some reason. So, think of the kind of movie this must be, where I’m rooting for the title character and the program he so desperately wants to be a part of, despite the fact I can’t stand that same entity!

Watch Rudy. If it’s for the first time, I wish I was there to experience it with you. If it’s a repeat, you’ll be glad you saw it again – particularly as a warm up to College Football, which starts this Thursday, September 3 on ESPN. Enjoy the games this fall! 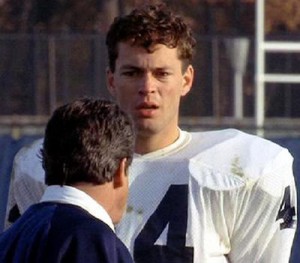 Fine. You need one more reason, don’t you? OK, sure! We here at ronhamprod.com are always happy to oblige. Look at the picture to the left. That’s right. A young, unknown actor at the time named “Vincent” Vaughn has a nice little supporting role in the film. Now, you really need to watch Rudy.

P.S. – I’m not one to point out the “flubs” in movies… I think it’s a miracle that excellent movies like Rudy ever get made – so who cares if there’s a mistake or two?? But, during my latest viewing, I saw something that I think other College Football Fans will appreciate. It’s less of a mistake and more of something that makes you grin as a College Football Fan… In the climactic scene of the final game, as the Irish are ready to take the field for the kickoff… I swear, one of the extras in the stands is brazenly displaying his “Boston College” flag. See it for yourself – that cracked me up.

Apologies, but no trailer for you this time. If you really want it, you can find it… We watched it and felt it let on too much for first time viewers.