What games have you played? 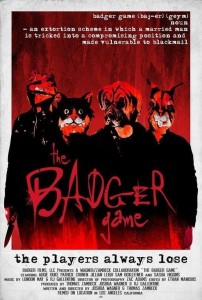 Please find The Badger Game now available on iTunes for rental and purchase – if you’re in the mood for something suspenseful and a bit twisted, have a watch of this film at home!

As you can no doubt tell from my volumes of entries, I’m not the biggest horror fan.  I  remember a film course I took, which included viewings of Night of the Living Dead (the original, 1968 version), and then The Texas Chainsaw Massacre (also the original).  The class then sat through a documentary on the horror genre – and how seriously these two titles in particular were taken by film academics.  Straight faced, they made the case that these two titles made legitimate, eloquent commentaries on the Vietnam War and the political frustrations of their day.  Have you… have you seen those films?  They had terrifying moments, but… I saw them a little differently.  Didn’t necessarily see the tie in – and perhaps that’s short-sighted on my part, but…

These thoughts surrounding classic horror films bring me to a title like The Badger Game, which is an excellent example of how entertaining the genre can be, while leaning towards thrills and suspense – and less on the side of blood and guts.  Don’t get me wrong!  There are some chilling, horrific moments in this film – but they fit within the parameters set by the production.

I had the opportunity to attend a screening of the film recently at a downtown Los Angeles theater along with the cast, cr 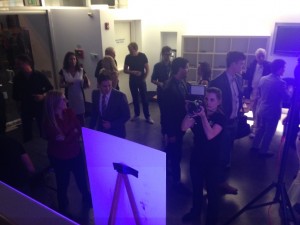 ew and their friends and family.  There is no substitute for this experience: watching the filmmakers themselves bask in the fruits of their labor makes you feel great about the medium and the people that are still trying to make quality films.  When you attend a premiere in this town, you have the added benefit of sitting next to the filmmakers, mingling with them before and after, and taking part in their celebration!  It’s just a treat…

So, despite my typical apprehension towards this genre, The Badger Game was to me a great picture because of how it maximizes all the artistic and technical el 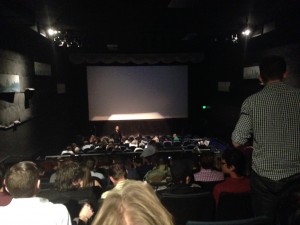 ements available to create its finished product – from the acting to the writing to the editing to the sound design and more, this twisted, suspenseful picture is well worth a watch, even for the mild fans of horror like myself.  And Badger is not trying to say, “here’s what a kidnapping has to do with the mortgage crisis!”  No, instead it’s asking you, the moviegoer, “what kind of games have you played?”  I mean, I honestly and truly hope I’ve never upset someone so bad as ol’ Liam.

Let’s get into it: the film involves a man who’s a really terrible human being.  Act One efficiently sets up a whole host of characters, most important of which is probably Liam (played by Sam Boxleitner) as the perfect – and all too realistic – villain.  He’s been with countless women, despite the fact he has a wife and kids at home – and two of these women have had enough.  In fact, in the opening scene, Alex (Augie Duke) convinces her pal Shelly (Jillian Leigh) to work with her and her brother, Kip (Patrick Cronen) to kidnap Liam and take him for $2 million he has sitting in a shady account off shore.  The acting was very well done in this film, but Patrick Cronen’s performance as Kip in particular  walks the tight rope between camp and instilling true fear. 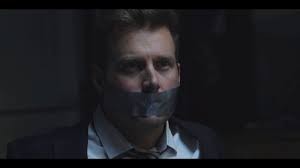 So, as we settle into Act Two of this violent variation of a “one crazy night” story, you’ve got the remote house.  You’ve got the kidnappers having a little too much to drink in the kitchen, starting to ask themselves, “can we really go through with this?”  You’ve got the victim, perhaps a deserving one in this story, duck taped to a chair in the garage.  And we have plenty of opportunity to see all those tools hanging on the garage wall: the directors, Joshua Wagner and Thomas Zambeck, have obviously done their homework.  What I mean is, these guys have seen the horror films I mentioned earlier and then some, because there were some truly awful images put on screen that looked legitimate – but never seem “scheduled.”  I can’t stand it when it seems like it’s time for another camp-goer to get the ax!  There were none of those forced scenes in Badger.  The directors also understand and appreciate that it’s not worth over-doing it.  Having those 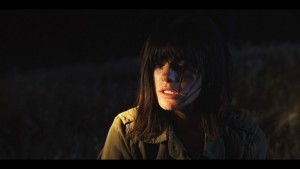 tools on the wall was a great idea, and one that built suspense in the audience member’s mind – whether or not some of those items came into play or not.  Kind of like what a guy did with a  movie about a shark a while back – it’s what we think in our mind that’s dangerous, and these guys captured that feel.

But for me, the real surprise was a certain character that was hinted at, then thrust right into the center of the ring.  Like in one of those wrestle-mania presentations, where you’ve already got four guys in the ring, and then another oddball is tossed in and everyone has to react to him.  I really don’t want to ruin this element of Badger for you, so please watch and see if you agree that the character I’m mentioning has the very best line in the whole film.  Again, credit to the filmmakers to successfully involve a character like this – because this element kept me on my toes till the credits.  What I mean is, once they tossed this guy into the mix, I was looking for more unexpected turns from the existing characters… 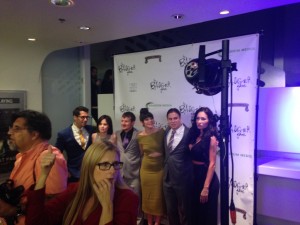 While I enjoyed the film – and it passed the “ice box chat” test with flying colors (see note 1) – it wasn’t without its weaknesses.  One of the kidnapers has a sudden turn towards the end I was a bit unsure about.  I would have liked to see the lady in the voice over booth from the beginning tied back into the story, and not just because she was gorgeous.  And there was a grave scene that I thought would have weighed heavier with an adjustment to the script…

But come on.  I’m a film academic – I admit it!  I want people to see The Badger Game because it’s a shining illustration of what can be done with an independent production: again, from the terrific talent involved to the unsettling location to the maturely handled sound design to the musical score, this film is firing on all cylinders.

Note 1: I may have mentioned this in other posts, but “ice box chat” refers to something Hitchcock described in an interview late in his career.  The interviewer prefaced his question by crediting “Hitch,” saying he’d pretty much done everything he could in the medium by this point, so… what else was there for him to do?  And I’m paraphrasing, but Mr. Hitchcock replied that there’s always “ice box chat.”  That’s when the film is so good that you go home, you get into bed, and yet… you just have to go to the frig, pull out a snack and talk about it with your better half.

One Response to What games have you played?