Whether it’s true or not, it’s one of the best… 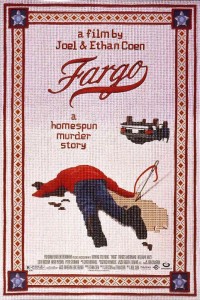 I don’t mind the very beginning, in which a superimposed message tells the audience that this film is “a true story”.  I think “true story” depends on your definition, doesn’t it?  I think that most folks, when you put the two words, “true story” together, they assume it’s based on some tale that actually happened historically or in real life.  In the case of Fargo, I think the lovable Coen Brothers simply meant that this is a very truthful story.  Its events happen to take place in 1987, in Minnesota.  It’s a story full of truth is another way to put it.  But, what’s this truth I’m referring to?  Glad you asked!  I think instead of “story,” you could very well have put “crime.”  Because Fargo really is all about “true crime.”  Most movies involving guns and criminals and murder and ransom and the like have sexy looking actors involved.  There might be exotic locations and incredible chase sequences, heists and shootouts.  But maybe that’s why those movies seem “less true,” entertaining though they may be!  See, to me, Fargo is an incredibly realistic film.  That’s what makes it so scary to me – regardless of whether these events happened, or not. 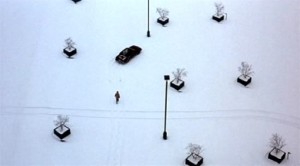 Before we go any further, I should mention what the film’s about: a botched ransom job.  That’s essentially it, isn’t it?  I mean, you could say it’s about one man’s selfish behavior that leads to the deaths of seven people, six of which are innocent.  That’s another way of putting it.  Or that it’s a cautionary tale about how to handle your in-laws.  There’s a lot of ways of describing what Fargo is about – and many of them are true.

The criminals in Fargo aren’t sexy.  At all.  Nor are the heroes for that matter – but the criminals argue over the stupidest things ever: one guy, who hasn’t said a word in four hours of driving, suddenly announces he wants “pancakes house.”  What’re you, four?  What’s the next request – for blanky and a juice?   Anyway, his partner immediately disagrees, saying they just had pancakes for breakfast!  He asks why can’t they have a steak and maybe the company of a prostitute for dinner?  Later in the film, the ultimate demise of one of the guilty parties results from an argument that he didn’t even need to win (see note 1).  To me, that’s the kind of thing real criminals argue about.  They don’t throw down over what you called their mom or girlfriend as often as they argue about things pancakes.  Again, “true” story!  Another element of realism to these criminals is that they underestimate each other.  I’m thinking not only of the moment when one guy (who’s been particularly quiet so far) murders a highway patrol officer, but also about Shep Proudfoot’s handling of his associate, Carl.

Even the action isn’t sexy.  Think of the kidnapping scene.  Poor Mrs. Lundegaard is at home, enjoying her morning talk show and working on her mending, when this jack wagon in a ski mask marches right up on her deck.  She just can’t believe it.  Think about that!  Do you remember that scene?  Mrs. Lundegaard just stares at this villain in disbelief as he cups his hands over his eyes and puts his hands on the glass to get a better look at the inside of the house.  If only she HAD believed what was going on, she might have saved herself.  But too late – he winds up, smashes the window with his crowbar and a scene of textbook black comedy ensues.  And here’s the un-funniest part: the guy that arranged all this mayhem is her husband, Jerry.

Why would her own husband do such a thing?  Well, it seems that he’s in some kind of trouble that requires him to gather lots and lots of money and very, very quickly.  That’s all the information we’re ever provided, isn’t it?  That Jerry needs so much money, not even the 10% finder’s fee on a $750,000 deal will cover it for him.  So, he decides to hatch a kidnapping plan that will require his own wife to be the hostage.  If you were to ask me which characters, in all the films I’ve seen, would qualify to be listed in a “top ten all time villains” listing, I’d have to say Jerry Lundergaard would fit in there undoubtedly.  Why?  I mean, he’s in there with Darth and Hannibal and the rest of them – how would I possibly find room for this guy?  Because I feel like I know him.  I feel like I’ve ridden the elevator with him at the office, stood behind him on the escalator at the baseball game, maybe even had a brief chat with him at the bar.  Truth is, we all know people like Jerry, don’t we?

Which brings me to the Mikey Yanagita scene.  When I first sat the movie in the theater years ago, I thought that scene seemed a bit out of place.  Why were we spending time with this guy when there was such an interesting investigation going on?  Sure, you could argue that even virtuous 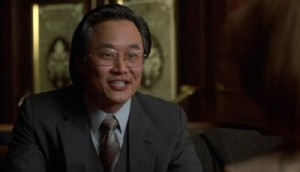 married women like Marge Gunderson like to be reminded they’ve still got it.  But having watched the movie many times by now, I think I know what’s going on here, finally.  We’ve talked about the violence that results from Jerry’s kidnapping scheme, right?  Well, I think we can agree that at a very base level, lies are the problem here.  As discussed, we never know what Jerry’s motivation really was – all we know is he needs lots and lots of moo-lah.  Well, Mikey Yanagita needs something too: some loving, a little attention, a little human contact.  And how far is he willing to get it?  He’s willing to lie to poor Marge, that’s how far.  He’s willing to make her believe that someone they both knew in high school not only married him, but died, too!

Here’s where the brilliance of the Coen Brothers’ storytelling technique is revealed.  How do they reveal this fact to us?  Does Mikey break down in the restaurant and confess to Marge?  Nope.  Is there a dramatic montage of Marge investingating on her own, looking at old yearbooks and maybe even some resources from her job as a law encorement officer?  Nuh huh.  Instead, Joel and Ethan (sorry for the familiarity, fellas) shoot Marge as she’s packing her bags in her hotel room.  As she folds, she chats with an old pal of hers from high school over the telephone.  It’s this pal – who is never even given screen time, by the way – who advises Marge over the phone that Mikey Yanagita is kind of a sick puppy, who not only was never married to the lady he said he married, but also, he stalked her! 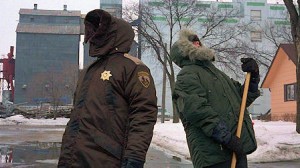 In summary, I think I can bullet point the reasons this film is such a classic, and well deserving of its spot on the AFI top 100 American films ever made – oh, wait… it’s not on the list!  Well here are some reasons to reconsider…

Not One Wasted Moment: seriously, if you were to remove a scene, which one would it be??  Even scenes like the police officer talking to Mr. Mohra about the interaction he had with Carl at the bar are… well, truthful!

Textbook “Black Comedy”: this is a line that is so hard to walk along it’s nearly invisible.  And yet, there are scenes that might make you laugh when you really have no business laughing: think of Peter Stormare’s sick character, Gaear Grimsrud, as he applies ointment to his cut during the kidnapping scene when he notices someone may be in the shower.

Truthful Mise-en-scene: please excuse the use of the d-bag film school term, but I can see how many filmmakers aspire to achieve this kind of tone.  It’s incredibly difficulty to pull off, but through all of the tools filmmakers have at their disposal – from music to editing, acting to cinematography – they created a one of a kind film experience, which overflows with truthful narrative. 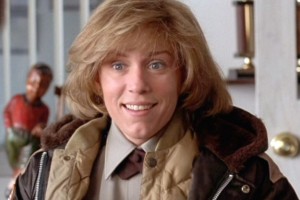 Note 1: For those of you who have seen the film, I’m referring to the scene in which Buscemi is arguing with Stormare over splitting the cost of the car!  The guy has a million dollars waiting for him in a case – carefully buried near a fence and marked with an ice scraper, mind you – and he’s going to argue with Stormare over a few thousand dollars…  And then he gets axed to death.  Again, the stupidity of these criminals is almost overwhelming – at least in how far they get before they die or are apprehended.