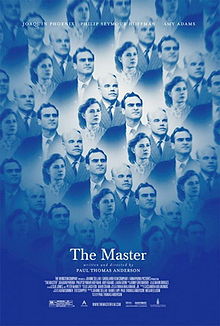 Watching The Master, I was reminded of American Psycho and The Killer Inside Me, which are two other films that come to mind when I felt like I was watching an incredible performance within a rather flat story.  In this case, the story concerns Freddy Quell, played by Joaquin Phoenix, and an impressive performance it is.  In fact, if you’re an aspiring actor, I would highly recommend this film for you to take in how Phoenix embodies every element of this man from his walk, to his clothes, to the way he talks out of one end of his mouth to his unpredictable violence.  Poor Freddy is a total alcoholic, willing to mix paint thinner, chemicals for developing photographs and even some kind of liquid from a torpedo into his homemade concoctions.  It’s depressing to watch him drink himself into a stupor throughout this visually impressive film.

It’s even more depressing to see how Lancaster Dodd, the so-called Doctor, Philosopher, Master – “and above all, a man” – takes advantage of this poor wretch.  And as you know from previous posts, that’s what I try to do: advise you, dear Reader, as to the substance of the film I’m commenting on, and then gently pull it apart in a way that d 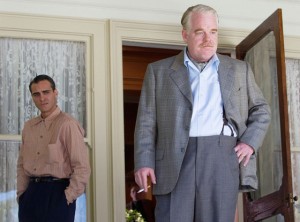 oesn’t give too much away.  Concerning The Master, there’s really not much more to it than a big man picking on a little man.  Dodd is supposedly based on Ron L. Hubbard, the founder of scientology.  Whoever he’s based on, he’s a despicable individual, who seems able to parlay his philosophies into free gas, food and lodging wherever he travels simply because he’s an excellent performer.  He speaks eloquently, tells vivid and entertaining tales and is able to charm an audience into believing what he says.  The connection between the two men is that they lash out when they get cornered – Quell physically, and Dodd by screaming at the questioning party until they turn submissive once again.

Anderson, the director, seems utterly fascinated with this kind of storyline.  There’s a man who’s in charge, be it The Master Lancaster, Daniel Plainview (oil magnate from There Will

Be Blood) or Frank T.J. Mackey (Tom Cruise in Magnolia) amongst other characters in his films, who negatively effects the supporting characters.  And that’s kind of the whole picture, a kind of two hours study into how many scenes we can endure of a bully tormenting their prey.  In this film, I felt as if there was no resolution, no change in the characters from beginning to end, which was very similar to the feeling I had at the conclusion of There Will Be Blood.

In short, the movie is like an old acting exercise, in which there are two players on a stage and a one foot high, sturdy, wooden box in between them. As the scene progresses, one actor or the other stands on the box to represent which one is dominant or “controls” the scene.  It’s an interesting thing to watch since some scenes have both actors jumping up and down off the box throughout, while others have the actors change only once, if at all.  The Master is indeed an entire movie of this exercise – and some scenes will blow you away.  Let me put it this way, while I was a bit disappointed in the entirety of The Master, I would roll some selected scenes from the film in an acting class for aspiring students.