Did You See the Oscar Noms? Well, Let’s All Scream and Flail Our Arms…

In Los Angeles, when it rains, local TV stations typically send a reporter to do a remote report from LAX.  It’s usually not even raining there, but it’s entertaining to see that the station is so dedicated to keeping us up to speed on the drizzle outside.  I like to

joke that when it rains here, folks will typically stop their cars, exit the vehicles and run around them while yelling and flailing their arms.  In reality, people do drive slower…

Regardless, why don’t we all just imitate this practice when the Academy Award nominations are announced?  I feel like the reactions I’ve been reading over the past two days have quite a variety, from “Where in hell is The Dark Knight Rises for crying out loud?!?!” to “What?!?  You’re telling me Tarantino didn’t get a Director nod?” to  “Wait, Cloud Atlas isn’t nominated – for anything?!?” to  “The Hobbit gets only three nominations?  I mean, that was the most amazing movie I have ever HEARD OF much less SEEN!” and my favorite, “Poor Ben Affleck!  I mean, what’s a guy gotta do to be nominated?”  Well, apparently he has to direct an ultra-low budget film that follows an unknown child actress through a swampy neighborhood.  And I love this headline in the article below, “Bad day for Argo,” from EW.  Oh, my goodness, I want to write some profanities so badly right now: you know how many nominations Argo received?  S-E-V-E-N.  As in “7,” including Best Picture, Best Editing and Best Screenplay.  Yes, my goodness, what a rough day indeed: let’s someone pass the hat to give the filmmakers some clothes, meat and bread for the winter months ahead. 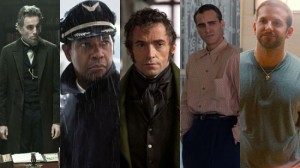 I had this teacher in junior high school who posted a quote from Thomas Jefferson, which read something like this, “When one is terribly angry, one should count to ten: when one is even more angry than usual, count to 100.”  So, everybody do me a favor and stand up, do ten jumping jacks, count to 100 and put your flailing arms DOWN.  So, your favorite popcorn-audience-pleasing-blockbuster didn’t get a nomination?  Why don’t you go watch the highlights of the People’s Choice Awards, hmm?  It probably won something there.  Or tune in this weekend to the Golden Globes, why don’t you?  It’s not like this phenomenon doesn’t repeat itself every year.  For example, I am still scratching my head over Shakespeare in Love besting Saving Private Ryan for Best Picture.  And the idea that Christian Bale wasn’t nominated for Rescue Dawn, I’ll probably never get over.

No, instead I’m excited to see the many films on this year’s list that I just haven’t gotten to: I’m looking forward to a little Lincoln, Life of Pi double feature next week!  This admission – that I haven’t seen many of the nominated films – brings me to an important point.  I find that a bunch of complaints launched about the nominations are typically because folks saw a film, loved it and can’t believe some OTHER film – which they haven’t seen and sometimes haven’t even heard of – could possibly have been better to warrant a nomination!  In their defense, when you work on a project, which could range from a movie to a sculpture to a quilt, you want to get some recognition for it.  That’s a natural and understandable human desire: but do yourself a favor and see the other bloody films!

Finally, I’d like to offer this perspective: why isn’t it really enough just to be nominated?  From Boxofficemojo.com, I can tell you that there were 655 titles theatrically released during the calendar year of 2012.  These titles collectively earned $10.4 billion dollars.  The movie industry as a whole made more money and sold more tickets last year than ever.  You, Mr. or Ms. Oscar Nominee, are one of five films (for most categories) out of 655: in other words, your peers and the elite, VIP crowd within Hollywood thinks you are amongst the 0.007% percentile.  And you’re going to cry yourself to sleep if you don’t win?  I, for one, will refuse to pass the hat for you.

Here are some nominations that I was hoping for, which didn’t come to fruition.  But you don’t see me flailing my arms, do you?  Honestly, your favorite superhero movie didn’t get a nomination for Best Picture?  Here’s a cup of milk for you to spill since you’re crying already.  Now, read the rest of this entry below, then it’s upstairs with you for a nap.

I also have some questions for the Academy, some of which I think are legit…  How can a film be nominated for Best Foreign Film, or Best Animated Film AND Best Picture?  What’s the difference between a Lead Role and a Supporting Role (see note 1).  Are there existing bi-laws in the Academy rules that stipulate John Williams and Woody Allen must be nominated if they are involved in any films in the prior calendar year?  Is there any kind of quiz or detailed testing procedure that occurs during which Academy Voters prove that they’ve actually seen the films they’ve voted for?  What is the reasoning behind the idea to not serve refreshments during the ceremony?  Come on – wouldn’t you just love to see a bunch of Dodger Stadium vendors marching down the aisles during the first commercial break?  “Peanuts!  Got Gary’s Salted Peanuts, right here!” and, “Beer!  Who needs a cold one?  $11, Cold Beer – oh, certainly Mr. Lee.  Loved Life of Pi, by the way.  Got beer here!”

Seriously, I’d love to hear from you guys on this.  Which film did you love the most from last year?  Did you think a certain film got snubbed in a particular category?  Then leave a comment and, for the love of God, tell me WHY!  Are you just excited to see the show?  Should be a good one with ol’ Seth hosting…  I will probably do a follow up to this as I see more of the nominees – which should be a fun process, for the record.

Note 1: A publicist “in the know” once explained to me that there is no difference between the Lead and Supporting categories: based on the performance in question, the film’s production staff simply decides which category they think they have the best chance to win and submit accordingly.

One Response to Did You See the Oscar Noms? Well, Let’s All Scream and Flail Our Arms…