The Quintessential Version of the Dickens Classic 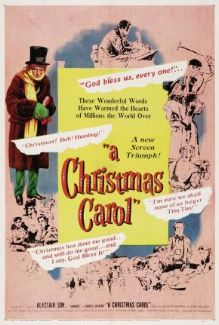 Have you read this novella by Charles Dickens?  My second question in as many sentences is this – I wonder why novellas make such phenomenal films…  That question is for another post.  Regardless, if you haven’t ever read A Christmas Carol or even if you haven’t read it in years, I’d highly recommend it!  The eloquence of his language and the imagery he paints in your mind is perfect for entertainment, reflection and a little holiday themed reading on cold winter’s evenings this time of year as we head towards Christmas Day.

That said, I hope you further get a chance to watch this older version of the Dickens story.  Personally, when it comes to screen adaptations – particularly of such a well known tale as this – I think the closer to the author’s work, the better.  In my view, this particular  production makes as close a visual version of the original novella as is possible.  And as Mozart says in Amadeus, “How can I improve upon perfection?”  This production, led by director Bryan Desmond Hurts, makes no attempt to try to deviate or improve upon the story – or worse, shorten it in some way.  Again, the story is fresh in my mind because I just read the book and saw the film, but it impressed me how the Ghost of Christmas Present even shows Scrooge the mining family in the film. 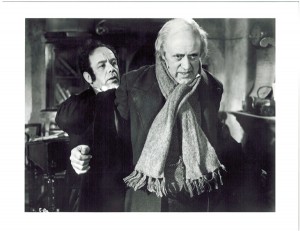 You really can’t talk about this version without touching on Alastair Sim’s performance.  Talk about being born to play a character: Mr. Sim absolutely captures the essence of Scrooge when he’s a villainous wretch you almost like to hate.  Think of the scene in which the two representatives of the charity stop by his office to request a donation.  His look of “who really cares” just gives me the shivers.  And even as Scrooge is going through the experience of visiting with the three Ghosts, you can believe he’s overjoyed to see Fezziwig again, heart broken to see the reality of the Cratchit household, and terrified to see his fresh gravestone.  Then, once he has learned from the Ghosts, Sim as Scrooge flips you on your side when he celebrates Christmas morning.  I feel like the leads of other versions embody one side of Mr. Scrooge better than the other. 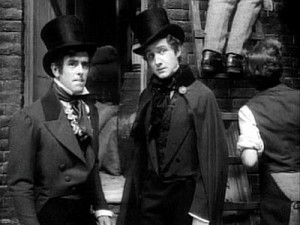 Regardless, watching the film again this year, I was impressed with the performance of George Cole as the young version of Scrooge.  In particular, I liked how he seemed more fearful as more shadows of the past were revealed.  He sells the idea that as he did better in business, Scrooge became more scared of being poor, scared of losing face amongst his business colleagues, perhaps all stemming from his original fear of his father?

The last thing I’ll say about this version of A Christmas Carol is that for me, the players of the Cratchit family are ideal.  When the Mrs., played by Hermione Baddeley (you might remember her from Mary Poppins as the maid?), hears her husband try to toast Mr. Scrooge, you really buy how angry she is.  Why should she toast such a man who puts her Robert through the ringer on a daily basis?  Bob himself, played by Mervyn Johns, is convincing as a guy who’s willing to do anything for his family without being a fool.  It’s as if Dickens were trying to create a character out of that old saying, “turn the other cheek.”  And Tiny Tim in this version is fine too, unlike other depictions of the story in which – and pardon me for suggesting it – the makeup and portrayal of the little lame boy leads you to believe he may pass out at any moment.

Finally, I find it fascinatin 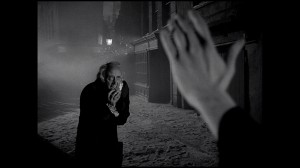 g how these Christmas movies find an audience.  Having seen this on TCM, Robert Osbourne informed me that this film was supposed to be exhibited in Radio City Music Hall, but the management thought this version was far too dark at the time.  However, after years and years of airing it on TV, many folks like myself find this to be the quintessential version.  Doesn’t this success after years of airing on TV and word of mouth sound like the result of A Christmas Story and It’s a Wonderful Life?

A little bit of trivia:  The narrator of this film is a fellow named Peter Bull, who is the big, portly gent in the London stock exchange in the first scene.  He was a character actor in his time and might be best known as the Russian Ambassador in the Kubrick film, Dr. Strangelove, who couldn’t stop laughing at Peter Sellers in that one infamous scene…