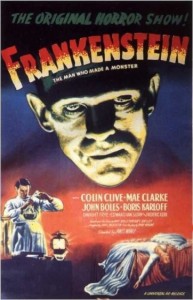 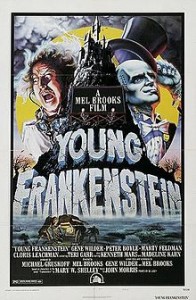 Hopefully, you’ve had a great Halloween and are still in the mood for a couple of fun, seasonal movies…

Good old TCM aired the original (see note 1), 1931 version of Frankenstein this month, and I had an opportunity to watch it this weekend.  I can see why it’s a classic, if not a little cliche and downright funny in some parts.  Within James Whale’s version, there is plenty of horrific action to be afraid of, including lightning storms, a drowning, drunk family elders, people burning other people to death, a woman attacked in her home, a mish-mash of body parts being sewn together and then sparked to life with said lightning…  Some folks might say that this classic is too tame by today’s standards (see Note 2).  Perhaps that’s what I like about it so much!  There is a straight forward style to the film, which lets the actors and the setting of the story do much of the legwork in building the suspenseful story towards its inevitable climax.  Just as we see in King Kong from 1933, this is a tale about Man’s desire to have things that we’re not supposed to.  It’s as simple as that – to me, that’s a scary element to human nature to explore. 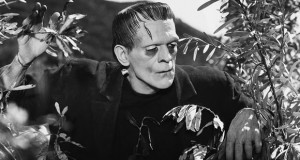 But just like I commented on in my Psycho entry, for me it’s the little things that make Frankenstein horrific.  Sure, the monster made of dozens of different body parts is scary when you think about it – and thanks to this version for sparing us the visual of this assembly.  For me, watching ol’ Dr. Frankenstein and his faithful assistant, Franz, mill and dig about the graveyard in the opening scene was plenty for me.  But what about the angry crowds who nearly riot in this picture?  What about the collateral damage of the little girl – who was the only one who tried to be nice to the monster, by the way – who drowns because Dr. Frankenstein made this “thing” he couldn’t control?  What about the doubt and fear the good doctor’s fiance feels as she triesto figure out this “experiment” he keeps vaguely referring to?  What about the good doctor’s crippled assistant, Franz, tormenting the monster with his torch?  Apparently the monster’s Achilles Heel was fire in the end, which makes his ultimate demise all the more upsetting.  In all, while it’s easy to discount these classics like Frankenstein and Nosferatu as dated and out of touch, I submit that there’s still some very basic, primal fears that are accurately portrayed here – even if some scenes were obviously shot on a sound stage!

If there was one funny element to the 1931 version, it was Dr. Frankenstein’s dad.  This guy really, really liked his cocktails.  He kind of fumbles over his lines and loudly interrupts people that he’s talking to, which reminded me of Mr. Potter in It’s a Wonderful Life.  There’s one scene in which a bunch of the maids in the Frankenstein mansion bring the old man some drink, and he gets all excited, saying something like, “Well… we shouldn’t let this bottle of my Grandmother’s go to waste….” I couldn’t help but laugh.  Which is a nice segue to the 1974 comedy classic by Mel Brooks, Young Frankenstein.

In the same way that I would suggest you immediately watch the Austin Powers movies (at least The Spy Who Shagged Me and International Man of Mystery) after you finish the first five installments of the James Bond series, I see Young Frankenstein as a truly appropriate end to your evening once you finish the Whale classic! The strongest element of Mel Brooks’ comedy is how he militantly follows the original story.  Even shot in black and white, the sets and the elements of the story are a near mirror image of the original.  In this one, though, you’ve got Gene Wilder as the young descendant of the infamous scientist, who insists on being called “FRONK-en-steen” at the beginning of the tale.  But by the time he’s come to the castle and he’s had time to poke around the secret passageways, not to mention his finding the great book, “How I did it” by his uncle, the young man is ready to pick up where his elder left off.

Just as the little things hit me in the 1931 version, they effected me in this 1974 parody, too.  It’s as if Wilder is merely fueling the supporting cast’s great moments!  You’ve got Cloris Leachman as Frau Blucher – “kneee-hee-heee-hun,” go the horses.  Then there’s the town constable, played by Kenneth Mars, who seems to have gotten used to his wooden arm.  Then there’s Marty Feldman, who plays Frankenstein’s assistant, Igor….

Note 1: Can I just say how much I adore Wikipedia?  For a movie nut like myself, it’s pretty good at the ol’ trivia – in this case, it reveals that there was at least one predecessor to the 1931 Frankenstein made in 1910 by Edison studios, if not another in 1915 called Life without a Soul…

Note 2: I’ll tell you one thing this film has in common with today’s films – its sequels.  This 1931 picture spawned five sequels, for a total of six films (not counting the parodies, which we’ll address in a moment here): so, when you think of the Nightmare on Elm Street, Friday the 13th and Saw series (see note 2), it seems horror is one of those genres in which the studios will make as many related films as the audience has a thirst for…  Here’s a tally of the sequels for each of these series below:
A Nightmare on Elm Street (1985) had seven sequels
Friday the 13th (1980) had seven sequels, too
Saw (2002) had six sequels, the last of which was in thrilling 3-D!