I had the pleasure of re-watching this little caper/action/adventure recently.  Now, I don’t mind admitting that back in the day, I was a bit of a DeNiro fan.  As in memorize the movie lines to Taxi Driver, Raging Bull and of course, Heat.  I mean slick my hair back like in Goodfellas kind of fan.  True story: once, back when my brother and I were busboys, we were closing the restaurant in a back-party room, and we recited the entire Pacino/DeNiro/restaurant scene from Heat without a problem.  Too bad it wasn’t Shakespeare, but we bloody loved it!  And I’m aware that I’m not unique in my impression of DeNiro’s talents – I’m sure there are many of you who can out-quote me and have gone to even more extreme ends to imitate his great roles.  So, when I saw the preview for The Score, I flipped out.  Not only did we have my man DeNiro starring, but we also had what some might call this generation’s equivalent, Edward Norton in there.  As if the film makers were teasing me with all this fun, THEN they throw in Brando’s involvement.  I’m not sure what I would’ve done if it had turned out to be a lie…

Regardless, in case you don’t take the time to watch the trailer linked above, the film concerns a tricky heist job that is presented to a master thief played by DeNiro named Nick Wells.  It seems that a long time associate of his named Max (Brando) knows the whereabouts of a priceless French scepter.  Aside from Max’s shady behavior, two problems exist in acquiring the scepter.  A scepter, by the way, is….  You know what?  If you don’t know what it is, use the dictionary!  Anyhow, the first problem with it is it’s located in Wells’ back yard – the customs house of Montreal.  Second, he’d have to work with this kid from the States played by Norton, who has inside access to the item.  An interesting element of Norton’s character is how he gets the job within the customs house playing the “part” of a special needs person.  It’s a great set up to a near classic film.  I say that because The Score opens with a great scene in which they establish why Nick is such a master thief.  The scenes involving DeNiro and Norton planning the job are also very interesting and terribly fun to watch: in other words, the story definitely tells a “new” heist story and walks the line of the caper genre without being cliche.  The main course of the actual heist contains unique elements, some tricky timing and surprises.

I think you can tell by now that I love this title: so why isn’t this film “four star” worthy?  What makes it fall short of “classic” status?   Unfortunately, two elements work against the film’s ultimate success.  The first is the involvement of the Angela Bassett character.  She’s Nick’s girlfriend, and they continue to work through their relationship problems as the story progresses.  Her character is in maybe five scenes total, and they’re the typical, contrived fare you might expect: you know, the “when are you going to quit this wayward lifestyle that you refuse to tell me about, Nick” kind of scenes.  I took the opportunity when I watched the movie recently to fast forward through these scenes.  It’s a different and immensely more fun film.  This is not – repeat, NOT – to take anything away from Ms. Bassett.  I adore her acting and her film choices over the years.  But her character in this film is a total distraction and ultimately, the scenes with her and Nick interrupt the otherwise tight paced action.  Another way to have gone about this would have been for Nick to have FINALLY met a woman at the end, something that he and Max could have been talking about throughout the film.  Speaking of Brando’s Max character…

It pains me to write this, but for me at least, the other element that prevents The Score from reaching “classic” status is Brando’s involvement.  And boy, do I detest myself for 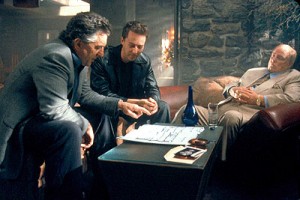 typing that out and publishing it, but the Max character is a distraction.  This comment is not intended to come across as harmful or pick on Brando just to do so: instead, I really believe his involvement in the film seems dialed in, cliche and silly.  Suddenly, the editing seems less sharp as Brando has to take time to move from this mark to that one.  His lines are delivered in an average and loaded manner: I’m sure you’ve heard the stories from Superman and Apocalypse Now of his having a wire in his ear through which an assistant would recite his lines – so he wouldn’t have to memorize them?  Can you imagine if Bruce McGill had been inserted in this role?  Or maybe Peter Gerety??  Or – pardon me for even suggesting it – Jack Nicholson?

Again, I fear that at some point (somehow, some way) these comments above will be taken out of context?  Let me clarify: I really, really like The Score.  And I like Brando, too: but I 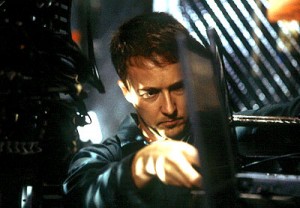 don’t like all of his roles, and this is certainly one of them I’m frustrated with.  I like how Frank Oz uses the music and a city that I’m far too familiar with in Montreal, Canada to set a tone to this caper.  There are unique elements to the script, the photography and these characters. And it pains me to talk negatively about Ms Bassett and Mr. Brando’s involvement: but I hope these comments come across as a tribute to the medium of film – it’s a fickle beast, isn’t it?  Just one or two little things can be “off,” and even with a great script, dynamite cast and cool locale, those “off” elements can ratchet the experience down.

Unintentionally Added Note: I saw the World War II action picture Red Tails a month or so ago.  Well worth a watch, by the way, but damned if this movie didn’t suffer from this same syndrome of having a love story which seemed oddly out of place?  Again, not taking anything away from the talent involved, but I would have much preferred more screen time dedicated to the pilot who gets captured and placed in the German prison camp in Red Tails.  That side story was fascinating!  Instead, I had to endure a romance that didn’t quite hit the mark.  I guess my question is this: is a love interest truly necessary in each and every film?  My suspicion is “no”…

Yet another film that’s worth a re-watch and where you can test my fast-forward approach is Hollywoodland.  I saw this in the theater and remember leaving with a feeling of disappointment.  I love 1930s – 1960s period pieces, particularly those involving cops and gangsters and the like, and the film just left me… “meh” somehow.  At the time, I couldn’t put a finger on what it was that disappointed me, because on the whole, it was a fine film.  Watching it at home years later, I realized it was the scenes dedicated to Adrian Brody’s character’s alcohol problem – they were so unnecessary!  The story was compelling and complicated enough without this additional hurdle for the character to jump through.  And why did he have to solve this problem during the time this story was told to us, the audience?  Would love to get feedback from you guys if you agree with this “idear” of mine, that some films are just needlessly loaded with side stories that detract from the whole?

One Response to OK, bye-bye…