A deserving member of the “Road Movie” genre 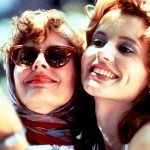 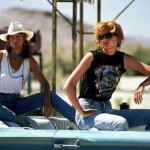 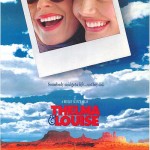 The tradition of the Bing Crosby & Bob Hope’s “road movies” all the way through more recent examples such as Midnight Run, Natural Born Killers and O Brother Where Art Thou, demand that certain elements be involved in the story.  There’s got to be a mode of transportation: Midnight Run and Planes, Trains and Automobiles both used more than one mode.  There should be characters that are interesting: with Natural Born Killers, the protaganists were interesting but atrocious.  In O Brother, they’re also interesting, but awful peculiar!  Sometimes there’s a “clock” involved, other times there are countless cameo appearances – it depends on the story, really.  With the movie I’m covering in this post, Thelma & Louise, the main characters are a couple of likable ladies from Arkansas, which makes the whole journey with them terribly fun!  I mean, they’re likable, which is good!!

The proof that this is a great story is in its would-be-simple log line: “a waitress and a housewife from Arkansas – both involved in “unfortuante” relationships – decide to hit he road for a girls trip, and experience much more adventure and surprise (about themselves, too) than they bargained for…”  Now, if I’m a studio exec in 1991 – or TODAY – I stop what I’m doing, hold my calls and listen for more.  Already my mind starts rolling: Sarandon and Davis were white-hot at the time.  Ridley Scott had already more than proven himself as an elite director.  The story delivered on the promise its log line made – it was adventurous, surprising and fun to watch.  It had great locations, spectacular character “arcs” (see below) and a swell supporting cast of characters for these two to interact with.  It even had tremendous lines!  Remember, “I don’t think he’s going to apologize…”

I had a couple of elements to the story I would’ve changed: I apologize to the writer and all involved, but I’m just blogging here!  My first change would be at the point in the story when Michael Madsen, who plays Louise’s (Sarandon) lover, comes to Oklahoma City to give her the $6,000.00 she has to her name, so she and Thelma can run and evade the cops a little better.  Not 10 hours after they have this $6,000 in their possession does Brad Pitt’s petty-thief character take it from Thelma!  I thought this was a weak story point after Louise had made such a huge deal about the money.  Was it that the film makers didn’t want to make Brad Pitt’s character too awful?  Was it to put another obstacle in the way?  Because I feel like there was a better way to do that: if Pitt had tried to get rough with Sarandon, if Madsen tried to take the money back, if the motel burned down… Again, I’m just blogging here.

The second item I would’ve liked to see changed was Harvey Keitel’s character.  Why wasn’t Ellen Burstyn or Kathy Bates cast in this role?  My point is, from one perspective, you could say this is a Woman vs. Man movie, and by putting a female character in this head-of-law-enforcement role, we would have someone of authority seeing the two ladies perspective.  I mean, poor Thelma is nearly raped, both the husband and boyfriend of these characters are awful, and ALL of the law enforcement folks after them are that awful brand of human, MEN (oooh, yuck!).  My point with making Keitel’s rather flat character a woman is that the ending would make more sense to me: there would be opportunities for Keitel’s character as a female to endure some of the abuse professionally that Thelma & Louise are experiencing at home and on the road.  As I say, just a blogger with an idea here!

After spending two paragraphs on what I’d like to have seen improved, I hope it’s clear how much I liked this movie: matter of fact, I loved it!  One thing I alluded to that supports this film’s text-book / classic status is what’s called the “character arc”.  Look at these two photos above: when Thelma and Lousie leave their suburb, they are dolled up, happy to be pals and endure their mundane lives of little daily excitement for weekends like this.  Now look at the next photo: by the end of this movie, these two characters are fed the f$#% up with their mundane existence, and they’ll be damned – be DAMNED – if they go back to it.  The fact that they made this change – and were STILL LIKABLE – is extremely difficult to pull off.  This kind of change in character is interesting to watch – and every wannabe screenwriter and studio exec is seeking this strong an arc.  Let me ask you: did you see this kind of change in Ben Stiller’s character at the movieplex this holiday season in “Fockers Part 3”?  Because if not, you might want to check out The King’s Speech for such an arc…

Random Note 1: I wonder if Madsen sold Quentin Tarantino on Keitel’s involvement in Reservoir Dogs – or was it vice versa – since they worked on this film together?  Or since they shared no scenes, was that collaboration completely random?

Random Note 2: I want to give a great accolade out to Stephen Tobolowsky, one of the many unsung and uber-talented “character actors” of today.  While he played one of the rather flat law enforcement types in this one, you will no doubt recognize him from Memento, The Insider, Sneakers, Groundhog Day and countless TV appearances (including one of my favorites, Deadwood).  I mean, look at this filmography!  http://www.imdb.com/name/nm0864997/

Random Note 3: Lotta random notes this time, I know – but I thought it worth mentioning that this was a title that my parents INSIST I wait to see: we were still in the “no rated R” movie zone at the time, and frankly, I’m glad I waited because I have seen quite a few of the “road movie” genre by now and this one definitely stood out!!