Most definitely a character driven film… 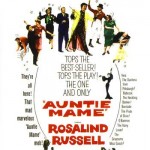 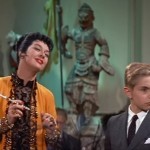 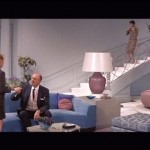 There are films that are driven by story.  There’s a bomb in a building and the characters involved have to get it out, or else!  Or there’s a war about to begin and there’s a lot of good-byes tearfully said before the obligatory violence is let loose on screen. Or, there’s a war that just ended and the boys are coming home – how will they be received?  Or there’s a boy and a girl and the boy falls in love with the girl before losing the girl… you get the idea.

There are other films that are much more character driven, as in, “How would James Bond react to an adventure… in Las Vegas!”  Or how about, “How would Indiana Jones behave differently if he had his own Father in tow on an adventure?”  Or, how would the title character in this film I watched over the weekend, Auntie Mame, react to just about any situation!

I really liked this movie for several reasons: first off, I saw it on TCM and they do a splendid job of presenting the picture as it should be – in wide, widescreen and in its full Technicolor radiance as I’m sure it was presented back in theaters in 1958.  The second thing I liked was the huge Warner Bros. emblem at the start of the picture, followed by a stab at the very studio later within the dialogue.  Of course, the third thing I liked was the primary shot of Auntie Mame: she’s got just about the most decorative Manhattan apartment you could imagine (for the time the film was shot), she’s having a rip-roaring party and doesn’t really care who attends – including her little nephew who’s been thrust into her life suddenly.  There are roles that I believe certain actors were simply meant to play: Connery as Bond, Janet Leigh in Psycho, Eastwood as Dirty Harry… you just can’t imagine anyone else embodying the role!  And Ms. Russell as Auntie Mame is another example of this theory.

From the opening act onward, the movie definitely had its moments.  I’m thinking of how Mame “survives” at a department store job over the Christmas holidays when all she can fill out is a receipt for COD.  Another scene that had me cracking up was the horse riding/”The Hunt” scene – and subsequent preparation for her side-saddle performance.  And particularly the way she would respond when anyone said something she didn’t care for…

I suppose another reason I got such a kick out of the movie is that it had been recommended to me by a pal who really, really likes it: I don’t know about you, but I feel like sharing films you love is like attending the game of your favorite team with a fellow fanatic, or sipping a fine red wine with a fellow connoisseur, or a book, mix tape (dating myself) and recipe.  You get the idea – it’s just fun to have someone else get a kick out of a movie you’ve been watching for many, many years!  Thanks for the recommendation, P.P.

One Response to Most definitely a character driven film…