Apparently, this is John Sayles month 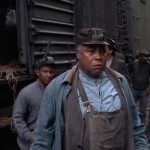 I DVR’ed this one from Encore a couple weeks ago, and after seeing Sayles’ Eight Men Out, I was excited to see it.  Matewan, which is pronounced “MATE-eh-wan”, is the name of a small West Virginian town.     It’s little more than a train stop populated by folks who work exclusively at the local coal mine, which is owned by “the company”.  This film concerns a 1920 labor strike in Matewan and the attempt by the coal company to put it down.  The workers, boy, these are some salt of the earth kind of people, and they come across as slaves to this company in the early, Act I scenes of the film.  You start to despise the evil company from the get-go, as their bored executive is bothered to explain the “rules” to new workers.  It seems getting a shovel will cost new workers X amount from their pay check and only two people – including children – can live in a tent at one time.  You are rooting for these coal miners to somehow get ahead!  But how…

And then Chris Cooper’s character comes to town.  Joe Kenehan’s his name, and simplicity seems to be his game.  His clothes are basic and functional.  He carries only one bag.  He’s polite as he gets directions from the local, flirtatious lady who relaxes by the train depot all day.  And he doesn’t let the lady who runs the boarding house, Widow Radner (played by Sayles usual, Mary McDonnell, who you’ll probably recognize from Dances with Wolves) get to him.  So, what is it with this guy?  What’s he want?  Why is he in town?  He’s in town to get a union started.

Now, I have neglected to introduce all of the supporting characters, assuming that Cooper’s Kenehan is to be the main character.  Talk about a film loaded to the hilt with character actors – and each performance besting the next.  You have David Strathairn as the town sheriff: he HATES the company and the guy who runs it.  You’ve got Bob Gunton – most easily recognized as the warden in Shawshank Redemption – who runs the local chapter of the union on the down low.  Then there’s Kevin Tighe (on ABC’s Lost – he was Locke’s father, that sonovabitch) and Gordon Clapp (best known for Metavoy on ABC’S NYPD Blue) who come in as Pinkerton-type men who want nothing more than to cave some heads in as a convincer to get these people to work!  Clearly this situation is a well thought out conflict, a text book example of “something’s gotta give”.  I will merely tell you this regarding the film’s climax: I had no clue it was going to go the way it did…

NOTE: Long and short of this discussion – I appreciate all of the actors involved in this film even more having seen this little-known gem.  I don’t know if you’ll have a chance to catch it on cable, or if it’s maybe still around at your local Blockbuster (if you have a local Blockbuster), but I was regretful to see it’s not a title available yet on Netflix…  Now, I’m not sure which Sayles movie I’m going to do next, but I can readily recommend another one to you right now: Lone Star, with Chris Cooper, Kris Kristofferson and even Matthew McConaughey.  Just get it, believe me.  Top of the queue, I tell you!

FINAL NOTE: I’m not sure if film makers actually have regular meetings with each other in super-secret locations like in kids cartoons from the 1980s?  Like an underground lair where Copolla, Soderbergh, Scott Bros, Scorsese and others gather on a quarterly basis?  I have to say films like Matewan definitely get me thinking of these meetings as a realistic possibility.  There were scenes in this movie that made me think, “Man, I wonder if the Coen Bros have seen this one?”  And other scenes made me say, “Dude!  Do you think Sayles consulted Alan Parker regarding how to cast authentic extras?”