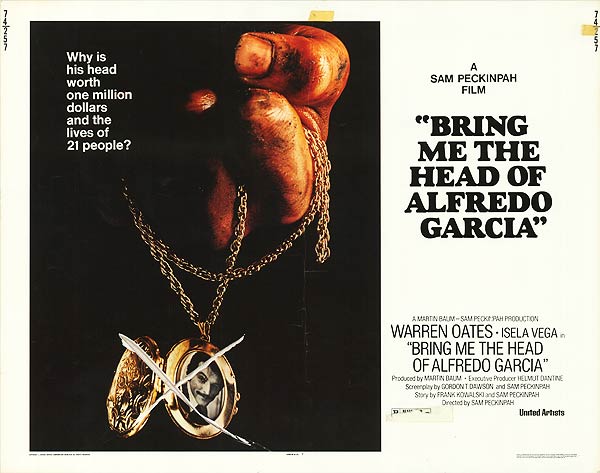 Before I even get into this one, have a watch of the trailer below!  I figure that this is the best, most honest way to proceed with this particular film, as it’s rather polarizing.  This is either your kind of film, or it isn’t – and if it’s not, that’s fine!  I just want to save you the time…  But, I thought this might be an interesting one to kick off our week of “spooky films” leading up to Halloween this Saturday:

Trailer – Bring Me the Head of Alfredo Garcia

For those of you who love Mr. Peckinpah’s work, or the dingy, grungy kinds of films that came out of the 1970s, or bizarre, “Midnight Movies,” (like this one) then Bring Me the Head of Alfredo Garcia is a must watch.  You feel dirty watching this one.  There are long, drawn-out scenes that are then interrupted by extraordinary violence, violence with which the characters involved seem all too familiar.  And, of course, at a certain point in the film, Warren Oates’ character, Benny, starts talking to the human head in the burlap sack, surrounded by “moscas” (flies) on the car seat next to him.  See what I mean about this film belonging on a Halloween list?

You can surely tell that I think Garcia succeeds where so many other dramas fail.  We’ve all been in that relationship that is troubled.  What I mean is, you hit a certain point where the two of you  agree you like each other – you may even love each other – but there is an event or a disagreement or something that brings the entire relationship to a head.  In this film, the man in the relationship is Benny the piano player.  He has been in the U.S. Army and lived in Mexico for six years or so.  Early in the film, he’s presented with an opportunity to grab a whole lot of money for returning Alfredo Garcia’s head to a group of bounty hunters.  He’s been scraping along all his life, and he sees this as his “ticket.”  I’m sure many of us can appreciate that desire.

Well, Benny’s girl Elita, played by Isela Vega, doesn’t see this situation as any kind of ticket.  She’s known Benny a while, and you get the impression that he’s her favorite.  What I mean is, Elita is a prostitute, which is a fact that doesn’t seem to bother either of them – but, I thought you should know.  Anyhow, the friction between them is that she hung out with Alfredo recently, too.  Of all the gin joints in all the world, Elita dated Alfredo Garcia!  In fact, she’s the one who advises Benny that old “Al” is dead already.  So, when she insists that she just wants to marry Benny, forget all about Al and his head and the millions waiting for them… you can see her side of the coin, too.  We’ve got the guy, the girl, and the friction between them.  And even though these two are not a “movie star” couple, we care about them. 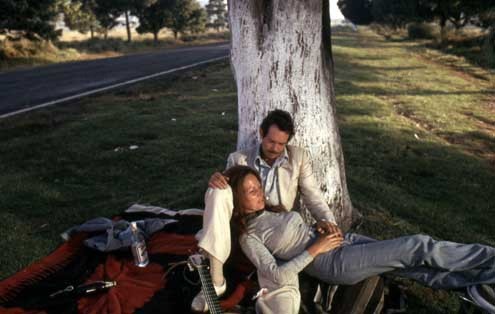 When I describe the film in these terms, making it sound like it’s about two people in love who are struggling to figure out this  fork in the road of their relationship, perhaps I’m piquing your interest.  Where I think folks derail is when you consider the obscene and shocking violence that Peckinpah depicts throughout this tale.  For example, I’m confused by the scene in which Kris Kristoferson and his biker pal show up to Benny and Elita’s picnic…  Like I said, Elita is a prostitute, and perhaps she’s used to being treated poorly by men.  And sure, Benny and Elita have been drinking tequila while driving and picnicking all day… but when the bikers show up and pull guns on the couple – and Benny violently reacts, was this the best way for these characters to handle the arrival of these two criminals to their campsite?  The story indicated they were more “street smart” by this point in the film… And if Peckilnpah’s point was to show how far Benny was willing to go, well… wasn’t there a better way of doing that? 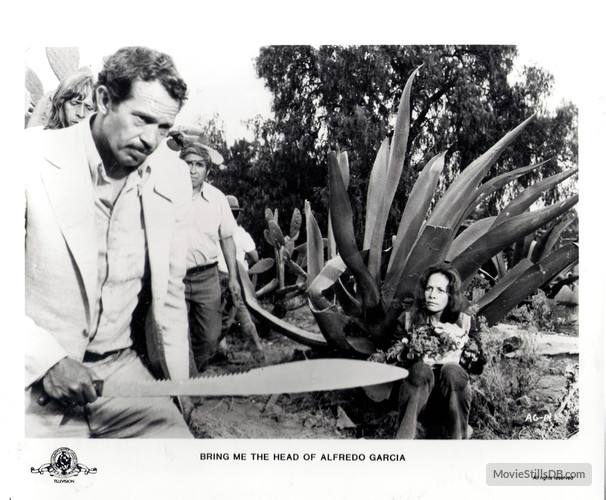 There is plenty that happens after Benny and Elita elude the bikers.  Now that the film has established Benny’s capacity for violence, the real trouble starts.  I don’t want to ruin anything for you, but there are shocking moments in Alfredo Garcia including graveyards, families and flies among other visuals.  In a way, Alfredo Garcia is all about the “how?”  As in, “how will Benny get the head?”  And then, “how will Benny get the million dollar bounty?” – or, “will he get that far?”  It’s a tribute to Peckilnpah’s filmmaking that a grimy, exploitation film like this still has so many compelling questions. 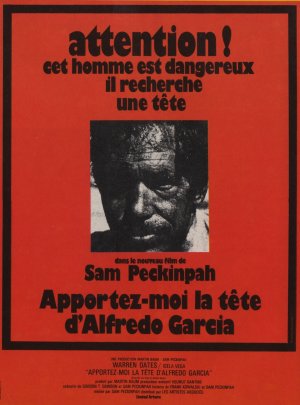 In closing, I will say this – it’s a pleasure to see a character actor like Warren Oates get the leading role after so many wonderful supporting parts.  I’m sure you’ll recognize Mr. Oates when you see him.  But again, I can’t advise strongly enough that this film has grimy violence.  If you watch it, you’ll see a guy crawl out of a shallow grave.  You’ll watch Benny talk to “Al’s” head, and kind of develop a relationship with it.  You’ll see 25 people slaughtered as the poster above alluded to…  Deep feelings of regret and despair are the fare of this film.  I guess I’m kind of daring you to watch it, huh?