The second time he said, “I’ll be back…”

The film opens in a prison.  Must be the future.  There’s an attempted breakout led by cigar smoking Ben Richards, or as some folks refer to him, “The Butcher of Bakersfield.”  Of course, we know him simply as Arnie.  The breakout’s going pretty well when one of the prisoners decides to run for the prison border before the computer geek can deactivate some sort of detection field… and the poor guy’s head gets blown to bits by the explosive necklace around his neck.  So THAT’S the type of movie it’s going to be, eh?  Typical super-action-’80s flick!  And let me tell you, these movies can quench your action-adventure thirst like no other (see also the catalogs of Van Damme, Stallone, Seagal and all of the Lethal Weapon movies…)

Well, soon we’re in the city, with the now familiar brooding and synthesizer/80s style musical score playing to remind us that trouble is brewing, it’s fermenting, it’s getting very close.  Richards and gang are meeting with some mercenary-resistance types who are handy at removing the explosive collars still wrapped round the prisoners’ throats.  As Richards sits in the chair to have his collar remove, the resistance fighters pitch him on the idea of joining their gang and fighting the corporation that kind of runs society with the government.  The only way the corporation seems to maintain control is by airing this popular, three hour long game show called The Running Man, on which prisoners like themselves run for their lives from various “stalkers” in a territory called “the zone.”  But, if they are still alive after the three hours, they’ve earned their freedom!  Richards scoffs at all this nonsense – both the idea of joining the gang and this silly show – and insists he’s going to go to Hawaii with his brother and that’s where the story ends.

Well, it doesn’t, obviously.  When Richards goes to his brother’s apartment, he finds it’s now inhabited by the lovely and fit Amber Mendez.  He’s none too happy to see her, but figures he can use her as cover to get to the airport and Hawaii.  Well, he doesn’t, obviously.  At the airport, Amber exposes Richards, and he’s taken into custody by these SWAT team looking dudes who fire a really fun rope/net catcher thing at him – those of you who’ve seen this film know what I’m talking about!  It’s pretty sweet.

Regardless, Damon Killian, who’s the host of The Running Man, gets a look at Richards trying to escape both the airport and the prison from a news report on TV.  He insists on getting this big man to play the game.  It’s worth mentioning that so far there have been, well, TWO WINNERS.  OK.  Could be just me, but I’ve watched this film a few times and I never got the impression that The Running Man was in its first or second season?  Regardless, as you might expect, Richards has no plan to submit to Killian and play his stupid game.  So, as a little convincer, Killian shows Richards video of his fellow escapees and says if he doesn’t go on, they will.  So, onto the show he goes, led by a bunch of leotard clad ladies and into a little, durable looking cage which is fired into a huge tube and into “the zone” where he will be tracked by the stalkers. 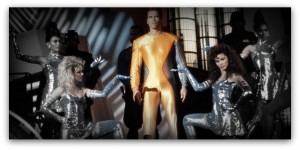 While they’re leading Richards in, the show displays a video of what Richards did to the live studio audience.  Apparently, he went to jail for shooting countless civilians who were rioting for more food.  But we remember from the first scene that it wasn’t like that at all: Richards wouldn’t follow orders and fire on the foot riot, so his fellow officers in the helicopter beat the snot of him and then fired on the folks anyhow.  But, Killian and the network have re-cut the tape.  As if this little humiliation weren’t enough, Killian has gone back on his promise and put Weiss and Laughlin, Richards’ fellow prison escapees, in two other cages to send into the zone!  Ruh roh… all Richards can say to Killian before he’s propelled into the zone is, “I’ll be back.”  To which Killian replies, “Only in a rerun.”  God, I do love these 80s dialogue exchanges… I do love them so.

What follows is a bunch of twists and turns and battles with the physically huge and colorful stalkers including Buzz Saw, Sub Zero, Dynamo, Fireball and of course, Captain Freedom – those of you who’ve seen the film can confirm that I’m not making these names up.  To say that this is a penultimate ’80s action flick would be most appropriate: we have huge, muscle-bulging stars toting machine guns and other violent weaponry.  We have the gorgeous woman who helps out at the right times.  We got a TV personality that stars as the villain and even a pretty great hair-band ’80s song to play over the credits!  You can’t say “spoiler alert needed,” because you already know what I’m going to say: the hero gives the villain exactly what he deserves, bucks the system and gets the girl!  What’s not to like!

By the way, does any of this sound familiar?  See my next post on The Hunger Games to see what I’m talking about (and I’m sure I’m not the only one associating these two films…)

One Response to The second time he said, “I’ll be back…”