I saw the trailer for this new Netflix film a couple weeks ago, and this week I finally got a chance to see it.  1922 is a spectacular entry in the horror genre because it doesn’t go too far in its gore to the point it’s explicit.  Further, this movie trusts its story and its performers – and the result is a spectacular thriller that provocatively presents the question, “what’s the fallout of a murder?”

Some might disagree with that synopsis, or my presentation of the question the film really asks.  I think that’s OK.  The beauty of this film, based on a Stephen King novella by the same name, is that it doesn’t use the cinematic devices that so many films use today.  It’s much deeper than the typical slasher movie or “us vs. them” setup.  The result is a genuine, slow burn that convinces us we’re watching a farmer from the 1920s conspire to kill his own wife – with the help of their only son.

The story is adeptly displayed in the trailer, and the reason behind the murder is quickly laid out for us.  Wilfred James (played by Thomas Jane) married Arlette (Molly Parker – might recognize her from House of Cards and/or Deadwood) years ago.  Sure, you might think it’s because they’re in love, but as the story unfolds, it seems most likely that Wilfred married her for the 100 acres of land she controls.  As family struggles dramatically increase in regularity, Wilfred pitches his only son Henry on the idea of, well, dispatching Arlette.  Otherwise, she might take him away to Omaha so she can open that little dress shop she always wanted.  Obviously.. such a move would take 14 year old Henry away from his first true love, Shannon.

I must insist on leaving the plot and details surrounding it right there.  This is one of those films where, the less you know the better.  What unfolds really reminded me of the nonfiction author, criminologist Colin Wilson.  He has two big books I read, “The Mammoth Book of True Crime,” and its accompanying “Part II.”  In these behemoths, which I highly recommend to aspiring writers, the author details the types of crime, their history and the numerous examples that fuel his descriptions of kidnappings, poisonings, arson – really any kind of crime you can think of.  It’s a tough read.  I mean, have your favorite sit-com on stand by for watching before bed. 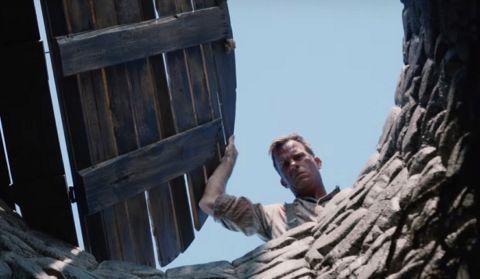 Anyhow, Wilson’s detail is very matter of fact – an example might be, “Mr. Simpson had had enough of his wife cheating on him.  So, one day upon returning from the office in late 1958, he took a kitchen knife and stabbed her 32 times.”  I’m not saying this example is in Wilson’s books – but his tone has a matter-of-fact-why-are-you-gasping quality to it.  This film shares this matter-of-fact tone to the point that it makes your skin crawl.  I was thinking, “why is Wilfred so casual about this action?”  As the character says in the preview, the suggestion is that there are two men inside us all – the one people see, and then a conniving man.  What unfolds in the film is a study in what happens when the conniving one wins out.  And what’s fascinating to me is how close this story is to many of Wilson’s descriptions of true crime – down to the detail that many people over the centuries have claimed, “the devil made me do it.”

The presentation of the pre-meditation of Wilfred’s murdering of his wife is scary.  I mean, when in the history of Man has a murder ever gone to plan?  The King novella’s feel comes out in these early scenes when Wilfred is really piecing together the act – and how it’s the only option he and his son Henry really have.  Perhaps that’s the really scary part, how he’s able to convince his boy that if there was another option, he’d gladly take it.

Needless to say, the killing and disposal of poor Arlette is terribly frightening.  I think it’s scarier than the typical horror film – because it’s actual human-on-human action, and not “us against them.”  I have not yet seen King’s other hit adaptation, It, but that film is a great example of  “Us vs. Something Supernatural.”  There are other Halloween classics that have “Us vs. A Monster” or “Us vs. a Haunted House,” but as I’ve been thinking of 1922, I think it scared me because it’s so.. possible.

This is not to say the film doesn’t have its supernatural elements.  If you do brave the preview, I’ll say just one word – rats.  And believe me, Professor Henry Jones would not be able to get through 1922.  That said, the incredible effort that director Zak Hilditch has put into 1922 is perhaps best complimented by the fact that there were scenes in which I legitimately couldn’t tell if I was watching reality – or Wilfred’s perception of a reality.  Does that make sense?  Perhaps its combination of remote location of Nebraska farm land and the patience with which the film is edited that really contribute to the movie’s authentic, frightful tone.

Watch 1922 and see what you think – ’tis the season.  Aside from all the elements I’ve mentioned, I’d also like to point out especially that Thomas Jane’s acting is masterful.  He is supported by a very talented and able cast, but he literally sinks into this role.  He is unrecognizable and twists along with the plot – much like his character’s soul, I’m sure.  Will he be nominated for… an Emmy?  I wonder…