Glory to Ukraine – Glory to the Heroes 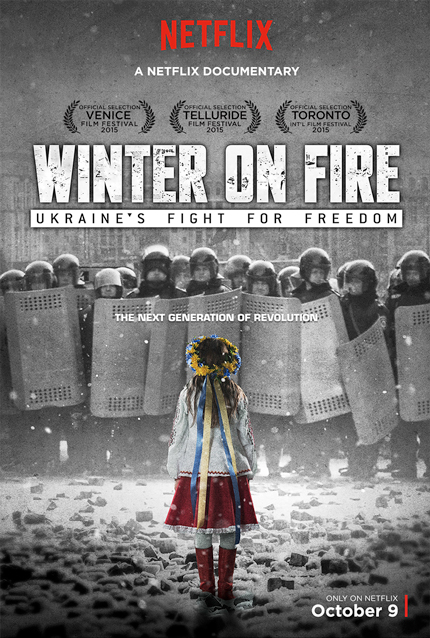 I hope that many of you will agree with me when I say that living in America, it’s kind of easy to take some of our freedoms for granted.  For example, there is a scene in Winter on Fire in which a husband and wife are driving down a Kiev street at night.  They are going to join some friends in a protest against then-president Viktor Yanukovych’s refusal to join the European Union.  The protest around the city center of Maidan had been going on for probably 60 days at this point in the film.  In its entirety, the revolution lasted over 90 days from November 2013 until the middle of February 2014.

From the perspective of my western-thinking, American citizen-born brain and heart, this couple is about to do something completely safe and understandable.  I have witnessed protests in the middle of Westwood here in Los Angeles – I mean people waving flags and walking down the middle of the street on Sunday.  In college, I saw a young lady violently confront a “Christian” preacher on campus.  I have seen protests captured in other news coverage and documentaries.  But, I have never seen what the Berkut (Ukrainian special forces/riot police) did to these people.  First they destroy their car with their iron batons.  Then, they drag the couple out of the vehicle and violently beat them.  Finally, they toss them in the back of another vehicle and kidnap them.

Everything I just described is shown without any filter for us, the audience.  So, I want to take a quick moment to advise that this film is one of the most violent, graphic pieces of filmmaking I’ve ever seen.  If it had an NC-17 rating applied to it, I would understand why.  Please consider carefully before watching Winter on Fire: while I was thoroughly and respectfully impressed with what I witnessed, it is an overwhelming experience.

For an idea of what’s included in this extraordinary film, please watch the trailer here:

Much of the film is like this scene of the couple getting beaten and kidnapped.  And yet, there are scenes of undeniable, uplifting hope to counter the ultra-violence brought by the Berkut.  The emotional upheaval of watching moments like the couple in the car is juxtaposed by protestors of all faiths gathering near the city’s monastery the next day,

sharing food and drink and receiving new, warm clothes from supporters that have come from across the country.  Ex-military protestors show other protestors how to shield themselves and organize properly when the riot police attack the next night.  Scores of

doctors and nurses work endlessly as new bodies are rushed into their makeshift hospitals.  The scene involving a bell tower near Kiev’s Independence Square (Maidan Nezalezhnosti) is one of the most uplifting I’ve seen on the screen, despite its surrounding violence.

And the protestors are not armed.

This post is difficult to compose, but I’m also insisting of myself that I complete it tonight, the evening I watched the film.  To that end, there are a couple of items I want to be sure and touch on.  First, there is something extraordinary in how the film illustrates that people – regardless of their faith or nationality or gender or any other designation – fundamentally require freedom to be fully human.  Second, I am extremely pleased that the film is so easily accessible through Netflix.

Concerning one’s freedom, I mentioned how the film contains moments in which overwhelming violence dominates the screen.  The brilliance in director Evgeny Afineevsky’s presentation is how he interviews survivors from the Maidan – and then cuts to their very involvement in searing moments from the winter of 2013-2014.  In one moment, he is talking to a man like you see in any other documentary – and in the next cut, that same man is taking the stage in the Maidan and speaking to crowd of thousands.  The important thing to note is that some of these protestors are ex-military.  Others are architects, engineers, lawyers and doctors.  Still others are famous musicians and artists, heralded in Ukraine in the same way we put our celebrities on a pedestal.  But these artists are there, in the middle of the square, leading their fellow countrymen to freedom.  I describe this superb bit of production and editing to show you how appropriately Afineevsky presents the point that freedom is a human right. 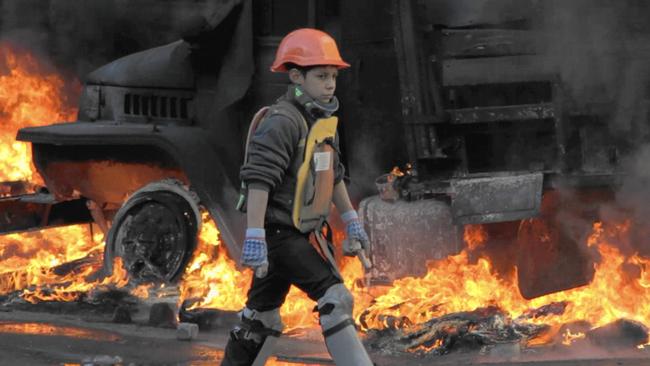 As for the film’s accessibility, I sincerely hope that other Oscar contenders in coming years take a page from Netflix’s video-on-demand playbook.  At least for the last several days leading up to the awards on TV, wouldn’t it suit the public to have access to titles like Winter on Fire?  I won’t name names, but other Oscar contenders in previous years – which I thought were very well deserved nominations – had very few viewers compared to “popcorn” movies generally seen by the public en masse.  So… why not at least present these lesser known features in the week before Oscar Sunday on VOD?  The filmmakers are still earning dollars for their title, but they are also providing a larger audience an opportunity to see their work before the Oscars are handed out…

Regardless, from my view, Winter on Fire is deserving of all the accolades it is receiving.  Its director, Evgeny Afineevsky is a hero of Ukraine for capturing the truth on camera for all of us to see.  I hope that this film is extremely helpful not only in raising awareness of human rights injustices worldwide, but also in bringing to justice those behind the disaster in Kiev during those 90 plus days between 2013 and 2014.

More materials related to the film: