A 99-Minute Education in the Current State of “Film”

Side by Side (2012)
Dir: Christopher Kenneally
Narrator/Interviewer: Keanu Reeves

I don’t know about you, but in my observation, professionals of any background tend to make it look easy.  Did ya watch The Masters last year?  Bubba Watson made it look perfectly simple to chip from a pile of mulch onto a green 80 yards away – with spectators on either side of him a mere three yards away. Back in the day when I would catch the pros like Courier, Sampras and Chang at the ATP tournament in Cincinnati every August, I would ask myself, “What exactly is wrong with you, Burke??  Why can’t you prep for the backhand on each and every shot like these guys?!?”  And switching gears to medicine, when I see my skin doc and he sees something suspicious… well, it’s only a matter of me laying down and him talking some college football or basketball to take my mind off that tool in his hand and – SWISH – that little old mole is no more.  Pardon me – perhaps a bit TMI?

Which is all a prelude to say how easy all those film-makers make it look…  I mean, who do you think those names that scroll for minutes on end at the end of movies belong to?  Do you think they’re made up?  “Come on,” you may think, “there’s no way that many people were required to make that 90 minute steaming pile I just wasted $12 bucks on!!” And sometimes you’d be right in your frustration.  But what about the other times, when you feel absolutely satisfied at having felt what you paid to feel – scared to death if you watched a horror film, or a little teary-eyed over one of those recent, drippy romantic dramas, or thrilled in a super-hero movie?  That’s where this lovely documentary made last year, Side by Side comes in: it discusses how the very images you’re seeing have changed. 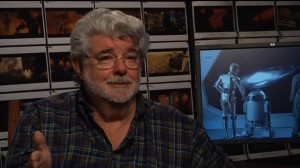 In short, there has been a digital revolution in the last 10-15 years that is covered in intricate detail in Side by Side as Keanu Reeves interviews some of the industry’s top directors, cinematographers and studio execs. You may not be aware of this, but “film” isn’t produced on actual hard-copy film that often any more.  This documentary does a phenomenal job of hearing from both sides of the argument; that is whether digital photography is better or worse for “cinema” than shooting on traditional, analog film.  To some, it might be a bit depressing to hear Martin Scorsese say that he may never shoot on film again.  To others, like George Lucas, digital photography is the best thing that ever happened to the industry because of the flexibility it offers in production, the myriad of options it offers in post-production for special effects and perhaps most of all, it’s fractional cost compared to film.

Again, to film purists, there are certain elements of shooting on film stock that will never be

comparable to the digital image.  For those of you who don’t know, film used to be exposed by light in a camera, and there was a physical reaction in which the image was “burned” onto the film.   In fact, there’s a sequence in this movie that does a tremendous job of explaining the physical process.  Regardless, in most of today’s movies, images are digitally translated into “1” and “0” and then able to be transferred to a computer program for editing and layering with all kinds of visual and audio effects.

For me, as a film fanatic, it was fascinating listening to Christopher Nolan tout the benefits of physical film (he even dropped a comment about film preservation) before they cut to James Cameron discuss how he envisioned Avatar as a 3D film from the very beginning, and had to wait for the technology to develop.  While Side by Side is a good documentary by definition (because it effectively educates us and presents both sides of the argument) I have to admit that it’s a real treat for film buffs.  And regardless of where you stand on film vs digital, or your level of interest in film, it’s kind of neat to be able to say you witnessed the transition from physical film to digital images – and barely noticed!  Seriously, watch the movie and look out for those sequences in which they compare the digital image to comparable film stock versions…