“When the heat gets hot,” who will you stand by?

Safety Not Guaranteed made me grin.  I admire its efficient and simple story telling style.  It’s a love story with true, authentic, genuine characters that I liked.  And it isn’t a moment too long, which I mean that in the best of ways: put another way, it’s edited well and doesn’t veer off in directions too ambitious for its own good.  What I’m trying to say is that the movie doesn’t try to be bigger than it is.  And the dialogue is extremely sharp – FYI, the title of this entry is a shout out to one of the better lines, in my opinion.  Anyhow, I highly recommend it, despite the fact you may be scratching your noggin, saying, “I’ve never even heard of this flick!”  Well, pardon me for a moment while I give you some other details on this little Independent film as an example of the current theatrical environment we live in (see note 1 below): 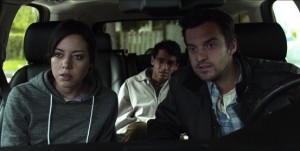 What is the point to all these bullet points above?  Simply this: while it looks like the “little film” has no chance these days, I strongly disagree.  In fact, I think the Independent film is going to swing the pendulum back to the point that many studio producers, directors and actors in the near future are experienced Indy veterans like Mark Duplass, who starred in this film, but has come from many shorts and low budget films.  Between all the digital methods of watching movies and particularly the channel offerings on YouTube – not to mention the VOD feature many of us are getting comfortable with on our TVs at home – I think the market for “small films” like Safety will only get larger.  Now then, let me just hop down from my soap box – there we go – and let’s get back to what we’re used to covering here at ronhamprod.com, shall we!?! 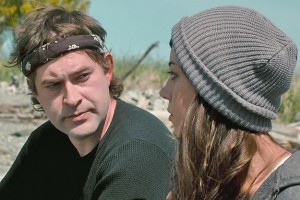 The story concerns a group of writers from a Seattle magazine who have very little to work on.  So, they decide to do an expose on the mysterious writer of a unique personal ad.  The ad is simple and brief in its request for a partner with which to travel through time.  The ad takes itself very seriously, even warning “safety not guaranteed, bring your own weapons” and “I’ve only done this once before.”  A veteran writer for the magazine named Jeff brings two interns on the assignment with him, the cute, yet unsmiling Darius (Aubrey Plaza) and the terribly skinny and awkward Indian-American Arnau.

What results is a nice mix of romantic comedy, sci-fi elements, coming of age and investigation.  The author of the article, Kenneth (Duplass), really is a mystery.  The guy works stocking shelves at a grocery store as he bores his colleagues with philosophical commentary.  And he drives a dilapidated Nissan!  Almost as s

oon as the threesome arrives in the town, their leader Jeff becomes bored with the Kenneth story and the real reason for his wanting to do the piece for the magazine is revealed.  However, like I said before, his own side story doesn’t really take away from the film – instead, it augments it!  All in all, I think you can tell that I don’t want to say too much about Safety: I wouldn’t even recommend watching the trailer!  I happen to like going into movies completely blind and let the characters and story unfold without any preview rolling around in my mind.  If you are new to this title, see what you think of it with no more preparation than this little entry…. You’ll thank me later!

Note 1: Sources for this intel include Boxofficemojo.com and Kantar Media among others.

One Response to “When the heat gets hot,” who will you stand by?