A sophisticated found footage film with a solid premise 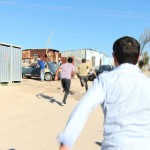 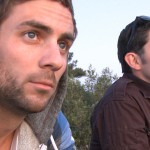 I have a friend who went on a mission trip with her church to Mamelodi, South Africa.    They were there for maybe ten days or two weeks, and one of the days she and her group were leaving a neighborhood where they’d just done some work.  The group was about to head back to the hotel, and my friend saw this little boy who looked really hungry and kind of sad.  She started to walk down the street towards him, away from the group when one of the trip coordinators grabbed her arm and said, “Please don’t go down there.  You should probably stay close to the group.”  Only then did it dawn on my friend that she was indeed in an unfamiliar country, not to mention a rough neighborhood.  She felt scared.   Maybe it’s because the story is set in Cape Town, South Africa, but my friend’s Mamelodi story came to the front of my mind as I watched the found footage documentary, 419.  I thought, “How awful would it have been if she just hadn’t come back?”

I think we can all identify with this feeling, right?  Those moments as you take the wrong street as you’re walking home from the bar, or after leaving the stadium or wherever it might have been, or when you find yourself lost in a foreign country: your heart kind of jumps up in your throat and you feel on edge, as if your whole body is deciding on the answer to the evolutionary question, “Do I fight or flee?”   This feeling, which we can all relate to, is a tremendous building block for a film.  Supplemented with an impressive journey from New York to Cape Town, with the purpose of finding and confronting a con man who relieved one of the film maker’s best friend of more than $30,000, 419 is a film with a solid premise, which doesn’t disappoint.

The film begins as the better found-footage stories do, with the admission that what we’re about to see is “true” and that it’s been edited together (see note 1).  Within the first few minutes, we’re told that   Mike, an actor and bartender living in New York, went to Cape Town, South Africa recently for a commercial shoot.  There, he was befriended by a man named Ezra, who introduced him to another man, Lebogang.  They had some good times and then Mike headed back to New York, only to receive some pretty convincing e-mails from Lebogang.  It seems Mike was the victim of an international scam known as the Nigerian 419, which is a reference to the country’s penal code.  Long story short – Mike received a wire of over $451,000 into his bank account that wasn’t truly his.  After he started spending some of it and the authorities found out, he was $30,000 in debt – and extremely pissed off.

Mike has resolved to travel back to Cape Town, confront this Lebogang and alert the authorities to the man’s scheme.  To help him in his quest, Mike’s friends Scott and Ned decide to come along.  Ned, a documentary film maker, will shoot the experience.  There is an added element established in “act one” as we meet these guys’ girlfriends.  Mike was with Emilea, but she’s now with Scott.  Ned is with Cara.  While Emilea seemed a bit shady (having dated two of the friends), Cara seemed like quite the supportive girlfriend throughout the film.  Regardless, the lover’s triangle is established in a scene in which the friends advise the girls that they’re about to leave on this trip. Emilea asks the question I had, “Why not just have the authorities handle it?”  While Mike tells the group that he’s serious about bringing Lebogang to justice, his buying shots for the group to celebrate the trip doesn’t exactly serve as a convincer.

What follows is an exciting travelogue to Cape Town, some fun camaraderie between the friends and some uneasy scenes concerning Mike’s friend and their guide, Ezra.  This native of Cape Town, who Mike had met on the commercial shoot, has agreed to help the group find Lebogang.  But it’s quickly established that Ezra is shady: he may say he’s an innocent guy just looking for a good time, but the gun he carries in his trousers supports the idea that he’s a hustler – and potentially violent.  I particularly relished a scene in which he helps Scott gain internet access in their hotel after one of the hotel managers literally closes a window in Scott’s face.  It’s amazing to me that Americans think the things we have at home – like running water and wireless internet access – work as well everywhere in the world!  In other words, there is an unwritten way of doing things that Ezra is trying to show the group.  He seems to want to help them find the guy that stole Mike’s money – but them chasing after people in unfamiliar neighborhoods, as they do in one scene, is not going to help.

Part of the reason 419 works so well is the authenticity achieved by the film.  What I mean is, when the gang attends a huge barbeque in one of the Cape Town neighborhoods, asking everyone they can if they’ve seen Lebogang, it looks legit!  The people caught on camera and the interviews they have – with the yellow subtitles below – all felt true.  In fact, the musical score layered against interviews with stateside characters like Scott’s Dad, Emilea and various law enforcement officials involved in the resulting case had that feeling of “60 Minutes” and not The Fourth Kind.  The fact that the trip goes horribly wrong for the friends is alluded to in the preview: but the way in which their troubles begin and end was both entertaining and terrifying.

I understand this is a documentary-found-footage genre film, but some scenes were difficult to hear: granted, that’s just my humble opinion and based on the advanced screening.  I feel like some of the climactic scenes might have stood out even better than they did had the sound design been consistent (in a theatrical sense) throughout the first hour of the film.  Put another way, I wanted to hear the characters and their interviews better in the first hour, but would have been totally fine in not being able to hear the events of the last third of the film.

One element that surprised me – and this wasn’t the only surprise – was that of the lover’s triangle.  I was frustrated by some of the screen time dedicated to Mike and Scott’s arguing over Emilea because I thought the story had moved in another direction.  Without giving anything away, I think it’s a tribute to Ned Thorne’s storytelling that the argument was indeed related to the outcome of their journey.  Regardless, 419 is an intense story with a relate-able theme presented in an entertaining way.   This film also had the maturity to not overdo it with the violence, which I think is a mistake that too many independent film makers make: let me put it this way, Mr. Thorne demonstrated the old saying that in scenes of violence, sometimes “less is more.”  The fact that 419 even includes a unique, yet believable twist – for lack of a better word – simply adds to the film’s sophistication.

NOTE 1: Perhaps it’s just me, but with found footage films, I’ve always preferred the ones like Catfish, which is very up front about the fact they have cut the footage together: it was found – and then bloody edited!  While I have to give credit to a film like The Blair Witch Project, which pioneered the modern era of this genre, I’ve never understood how that title doesn’t have a supporting story of the Detective investigating the crimes – and he or she cut the footage together.  Or like in a title like Cloverfield, there could have been a Defense Department group sitting in a room watching the footage and deciding what to do with the monster…. Just an idea!

NOTE 2: I thought the Cape Town thug named “Baby Face” imitating Al Pacino in Scarface was just about the funniest part of the film!